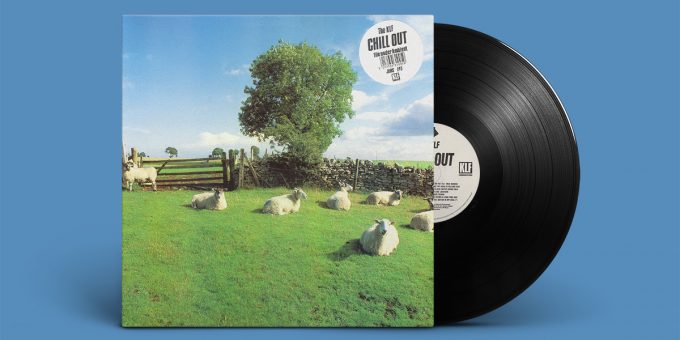 In Febuary 1990 The KLF released their concept album Chill Out, coining the phrase ‘ambient house’ with their downtempo soundtrack for a fictional roadtrip along the southern border of America.

As so often with The KLF, the basic idea came to them not as the result of meticulous research but from a happy accident in their studio instead.

We did a mix of a House track, left the drums off by mistake and suddenly realised that the House pads and chords sounded brilliant without the beat. So we decided to do a few more things like that.Jimmy Cauty (Melody Maker, 10 Mar 1990)

Apparently recorded without edits in one single take, the whole album was attempted several times – if a mistake was made, they started again.

BD: Chill Out was a live album. It took two days to put together. It was made from a lot of stuff we already had, bits and pieces, but it was kind of jamming, so it was done in real time. Some of the sounds were off LPs, some off tapes – we’d run around having to put an album on there, a tape on here.

JC: There are no edits on it, and quite a few times we’d get near the end and make a mistake, and so we’d have to go all the way back to the beginning again and set it all up from scratch. It was like spinning plates (laughs). We used two DAT players, a record player, a couple of cassette players and a 12-track, feeding through a mixer and back to a DAT.

BD: And we’d bounce things from DAT to DAT as we went along. We started Chill Out with 20 minutes of pads and went from there.Bill Drummond & Jimmy Cauty (Sound On Sound, Apr 1991)

While this might give the impression that Chill Out is nothing but a mere collage of train noises and rural sounds The KLF assured journalists that the album’s apparent formlessness was intentional.

It’s not just bits and pieces thrown in, every bit is exactly how we wanted it to be.Bill Drummond (i-D, Mar 1990)

Among the ‘bits and pieces’ used on Chill Out are versions of the KLF’s past Pure Trance singles, including a stripped down version of 3 a.m. Eternal mixed into “After The Love” by Jesus Loves You, and a beatless (and then yet unreleased) Last Train To Trancentral.

Despite being their biggest hit at the time Chill Out does not feature any mix of What Time Is Love, though a very Chill Out-inspired remix later appeared on the Remodelled & Remixed single.

Even though the track titles suggest a romantic road trip across the southern gulf coast of the United States, The KLF openly admit that they only ever visited these places with their fingers moving on the map.

We basically saw the album as a journey and when we had to come up with titles for each of the passages we sat down with a map and planned a route across America as a guide. The titles were designed to express some of the emotions of a particular piece of music.Bill Drummond (Melody Maker, 10 Mar 1990

It’s easy to see how, even before the needle drops for the first time, these titles start telling a story.

American cities and towns and places, to us over here, have a real romantic feel to them. […] I’ve never been to those places. I don’t know what those places are like, but in my head, I can imagine those sounds coming from those places, just looking at the map.Bill Drummond (X Magazine, Jul 1991)

Apart from the music itself Chill Out is probably best known for its iconic sheep-in-the-countryside artwork. According to Bill this was a reminiscence to another iconic record sleeve, namely Pink Floyd’s Atom Heart Mother, and how for The KLF it captured the post-rave atmosphere.

[That sleeve] is a very English thing and it has the vibe of the rave scene over here. When we’re having the big Orbital raves out in the country, and you’re dancing all night and then the sun would come up in the morning, and then you’d be surrounded by this English rural countryside… so we wanted something that kind of reflected that, that feeling the day after the rave, that’s what we wanted the music for.Bill Drummond (X Magazine, Jul 1991)

Looking for a similar image Bill and Jimmy went to a photo-library and asked for a picture like the Pink Floyd cover but with sheep instead.

Trying to find a handy name to describe their sound, The KLF came up with the phrase ‘ambient house’ to separate the album’s style from the more rhythm focused four-on-the-floor club tracks.

The phrase […] was basically born out of cynicism, but once we’d come up with it we thought, ‘Okay, if it’s got to be called something, that’s as good a name as any’. We knew that people would soon pick up on it – it’s the start of a new decade and everyone wants to have something different to talk about – so we drew up a list of tracks to recite to anyone who asked us what ambient House was. It was full of contradictions.Jimmy Cauty (Melody Maker, 10 Mar 1990)

An Orb Album In Disguise?

There had been some confusion concerning the recording of ‘Chill Out’ coming from a Volume interview with The Orb’s Alex Paterson, where the interviewer writes the following.

Alex and Jimmy Cauty started the first ‘Chill Out’ room at Paul Oakenfold’s Land of Oz club, upstairs in London’s Heaven. Using two decks and a CD player they mixed tracks by the likes of Kraftwerk and Brian Eno over bird-songs, BBC sound effects and weird tribal chants! Back in Autumn 1989 Alex DJ’d for more than six hours at an eleven-hour ‘ambientathon’ held at the KLF’s Trancentral HQ. And much of the KLF’s ‘Chill Out’ LP is, in fact, made up of cuts from the session! Kopyright Liberation Front: you bet your bottom, matey!Unknown, Volume

However since this is not a direct quote from Paterson, it is more reasonable to believe the KLF’s actual statements. It is possible that the interviewer was confusing Chill Out with the Space album, which was indeed recorded originally as an Orb album by Jimmy and Alex.

There were infamous weekend-long parties held at Trancentral though, and Paterson will have had some guiding/inspirational input, but it’s really the interplay between Bill and Jimmy that makes the KLF great. Chill Out is unquestionably a KLF record – just listen to steel guitars and sheep noises.

Chill Out received little to no promotion other than a few lines in the KLF’s own Info Sheets.

CHILL OUT was recorded live on location at Trancentral (the spiritual home of The KLF).

Don’t bother trying to listen to this LP if you have neither first switched off the lights and then laid your body to rest on the floor. Hopefully then the trip will be complete.

One of the Info Sheets also suggests that The KLF had planned to release at least one accompanying ‘seven-inch ambient single’ along with a video. This might refer to the unreleased Madrugada Eterna single of which one (albeit not quite ambient) mix appeared in the White Room movie promo video.

Sometimes it’s total bollocks [and] sometimes it’s irritating [,,,] but, under certain conditions or influences, several tracks are pure magic. […] It may be money for old rope but it’s out of this world.
Push, Melody Maker

No matter what anybody tells you, today’s ambient house starts here. […] Wrapped in a Floydian sheep sleeve, “Chill Out” seems to kick against the rave mania then filling Britain’s dancefloors, and indeed, leads the way forward: house music would never be the same again.
Unknown

This, The KLF’s patchwork of synthesizer chords and samples, distant voices and still lives, was [ambient house’s] finest hour, though there’s few beats on here. But while Chill Out had its tongue firmly in its cheek, the sounds – a sheep, Elvis singing in the distance, a train, a steel guitar – work beautifully together as a piece of music. The ambient blueprint Brian Eno invented […] has never sounded so colourful.
Unknown, Q Magazine

[A] quite unique journey for the early hours or the ultimate wind down.
Unknown

On first listen, this is a very strange experience. […] The constant fear is that Drummond and co. are being ironic, and aren’t really making a chill-out album at all [but] thankfully the shock never comes. This album turns out to be one of the most chilled-out you’ll ever hear.
Jake Kennedy, Unknown

[A] genre-defining represenation of Cauty and The Orb’s Alex Patterson’s early DJ sets. […] Chill Out added definition and a plot-line […] More coherent and enjoyable than the records it inspired.
Unknown

The LP release has been bootlegged multiple times – see our FAQ for details.

Differences between the UK and US pressings

The UK CD has only one track, 45 minutes long. The US CD on TVT/Wax Trax separates this into 14 tracks, based on the ‘song’ titles and approximate timings printed on the label of the UK LP. It seems that the KLF consider Chill Out to be one continuous piece of music, but had to invent a separation into songs so that song-writing royalties can be paid to those sampled. For instance ‘P. Green’ is credited with co-co-writing 3AM Somewhere Outside of Beaumont with Drummond and Cauty, and of course this is Peter Green of Fleetwood Mac, writer of Albatross, the melody that is heavily sampled on this track.

The Wax Trax release furthermore lacks the train engine sound at the beginning of the B-side and moves it to Elvis On The Radio… instead, and cuts the last 30 seconds of Alone Again. The reason for these changes remains unknown.