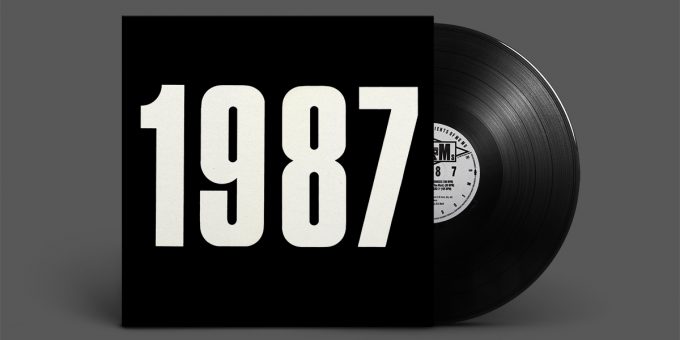 Following the single All You Need Is Love, The Justified Ancients Of Mu Mu’s first album 1987 (What The Fuck Is Going On?) continued the style of heavy cut & paste sampling, beatbox rhythms and King Boy D’s Scottish raps.

With the money from the single we booked five days in a cheap studio and recorded “1987-What the fuck is going on?”. We made it, not giving a shit for soul boy snob values or any other values, we just went in and made the noise we wanted to hear and the stuff that came out of our mouths. We lit a bonfire and put what we could get hold of, on it and then recorded the sound of the flames licking up the pyre. Not a pleasant sound but it’s the noise we had. We pressed it up and stuck it out. A celebration of sorts.Bill Drummond (KLF Info Sheet, Oct 1987)
Our sound is the sound of raw samples. We want it to sound shitty and crap. […] Often the mistakes are the best bits. I like the idea of just stealing things and recycling them.Rockman Rock (Sounds, 16 May 1987)
I think what will happen is we’ll be incredibly successful for a month – like the way things are at the moment, you’re lucky to get more than a month out of anything. So we’ll be famous for a month, then that’s it, we’ll say, Thanks, f*** it, and go on do something else. Everything has been done musically and that’s why we’re recycling it all.Rockman Rock (Sounds, 16 May 1987)

Rather surprisingly 1987 is also the place in which the verses of The KLF’s later single Justified And Ancient made their first appearance as a part of Hey Hey We Are Not The Monkees.

We didn’t listen to ‘1987 What The F—‘s Going On’ for a long time, and when we did we were embarrassed by it because it was so badly recorded. But I still felt we were able to get a lot out of ourselves through it.Bill Drummond (NME, 12 Jan 1991)
We recorded the single in two days and the LP in six and there weren’t really any major problems. The biggest problem has been making it legal. And getting the engineer to shut his mouth and get on with it. While we were doing it we were thinking, This is it – there’s nobody else doing this in the whole world, we’ve never heard this. The only way he had of knowning how good it was was by seeing how much the engineer hated it.Rockman Rock (Sounds, 16 May 1987)

According to The JAMs’ early plans a follow-up single to All You Need Is Love was meant to be lifted off the album.

We’re planning another single at the moment which will probably be ‘Don´t Take Five Take What You Want’ plus another new song. We haven’t been in a studio for weeks now so we’re quite eager to make some new songs. Also Rockman is going to be sorting out our first gigs in New York next week.King Boy D (Sounds, 16 May 1987)

A remix of “Don’t Take Five…” had allegedly been commissioned by Tony Thorpe but was (quite literally) binned.

I asked to do a remix of [Don’t Take Five] for our compilation1Funky Alternatives 2. They went “yeah ok sure wicked”, and I did a mix, gave it to them, they said it was shit. I think Jim actually threw it in the dustbin in front of me, like”this is shit!”. I was really “mrrmrrmrr” [scowls] about  it, but it was funny.Tony Thorpe (Woofah #4, 2010)

However, all their plans did not go anywhere as copyright reality finally caught up with Bill and Jimmy. Despite helping themselves to large chunks of other people’s work, The JAMs always took an artistic and rather pragmatic position on the matter.

RR: It doesn’t bother us. Their records are still there, it’s not as if we’re taking anything away, just borrowing and making things bigger. If you’re creative you aren’t going to stop working just because there is a law against what you’re doing.

KBD: It’s like saying Andy Warhol just stole other people’s graphics, which he didn’t. He took other peolpe’s images and re-cycled them re-used them. That doesn’t mean he’s robbed them and left them with nothing. We’re just doing musically what he did with Campbell’s soup cans and pictures of Marylin Monroe.

RR: It’s a form of pure plagiarism… well it’s not even that because plagiarism is copying and we haven’t copied, we’ve used things to create something. I don’t feel precious about what we’ve done. Once we’ve recorded it, I don’t care what other people do with it. Like that Samantha Fox record, most of that was recorded on a Fairlight 3. All the sounds there were probably sampled – we’re just being more honest about it.Rockman Rock & King Boy D (Sounds, 16 May 1987)

Apart from The JAMs’ first single 1987 is probably most known for the infamous “The Queen And I” and the large chunks of ABBA’s “Dancing Queen” it sampled.

There was no artistic choice in selecting the records we sampled for ‘1987’. We just used the ones that fitted. I didn’t even want to use that Abba track.Bill Drummond (Sounds, 24 Nov 1990)

It didn’t take long until the Swedish pop supergroup noticed, though. When their publisher Boco Music refused permission for the JAMs’ wholesale sampling of ‘Dancing Queen’ the Mechanical Copyright Protection Society instructed the duo to withdraw their album from sale and destroy all remaining copies and masters.

We were surprised at the reaction to that. We never thought they would find out about it. But we’re always aware that the past can catch up with us.Bill Drummond (Rage, 8 Jan 1991)

However, when the MCPS suggested that damages for infringement of copyright could be “minimized” if The JAMs would decide to co-operate fully in withdrawing the record Bill and Jimmy decided to take matters into their own hands instead…

At times their adventures are a little too freestyle, too busy, yet there’s never anything mundane here. An extraodrinary heist, indeed.
Stuart Bailie, Record Mirror, 20 Jun 1987

If you listen closely enough you’ll probably hear your own voice somewhere on ‘1987’. The only sane thing to do is buy it and hear yourself screaming out along with the rest of the world.
Roy Wilkinson, Sounds, 20 Jun 1987

With the entire sonic universe to choose from, ‘1987…’ actually manages, in places, to run short of ideas. […] [It] isn’t a bad record, just disappointing, the sound of one good idea spread very thin, of novelty wearing off.
Danny Kelly, NME, 20 Jun 1987

This album is brilliant rock ‘n’ roll. […] It resuscitates the past and blasts its ass with a unique vision. It’s best features are instant impact, righteous Clydeside anger, goddamn cheek, irresponsibility, bloody-mindedness and a lust for thrills.
Robin Gibson, Unknown

Justified Ancient Of Mu Mu have made scabrous celebration of 1987’s dizzily wide eyed appeal, while still managing to kick the people that count in the kidneys with more grace than the rickety spliff Red Wedge could ever muster. Inspirational.
Paul Mathur, Unknown, 1987

With all the fuzz around it there’s no surprise 1987 has been heavily bootlegged in the past. You can find more details about its many counterfeit versions in our FAQ as usual.