The Blacksmoke Organization was a self-proclaimed ‘occasional art collective and musical group’ consisting of Jimmy Cauty, James Fogarty (of Ewigkeit & In The Woods) and manager Keir.

Cauty had already been working with Fogarty’s brother during the early 90s, but when Jimmy moved to Brighton around 2000 he was looking for someone more local so James stepped in to help him painting a couple of canvases of apocalyptic scenes. At the time Jimmy was still working on remixes under his Greybeard alias, and since Fogarty was already a very active musician he asked him to contribute guitars on a few of his remixes, while Cauty would give some production advice in return. 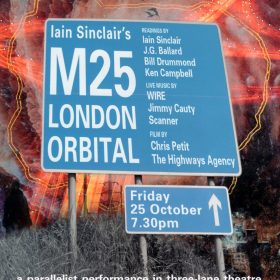 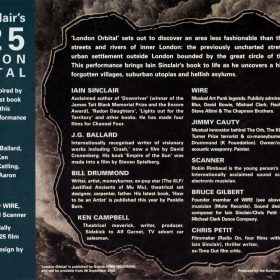 Originally meant as a one-off thing only, the performance sparked Jimmy’s interest in working on more noisy music. When Fogarty played him an EP about 9-11 he had been working on Jimmy realised the potential in Fogarty’s work and asked him to start working on some more songs.

The creation process within the band pretty much continued to be a division of labour. Fogarty would record individual tracks and provide vocals, then Cauty would go and rearrange all the parts and create the sometimes chaotic nature of the band’s signature sound. Despite being the prominent figurehead of the band Cauty always maintained that both artists were equally part of the band, though.

The collective rose to further prominence when the upcoming EP’s originally planned artwork – an image depicting the Queen on a stamp wearing a gas mask – made the headlines of The Times in June 2003.

Prints were sold through Brighton’s Artrepublic gallery until the Royal Mail stepped in and demanded their immediate withdrawal from sale, threatening to sue the gallery. While the postal service claimed that the image was a breach of its copyright on stamps and the Queen’s profile image the gallery argued that the posters were much larger than a stamp and that the Queen’s bust was Jimmy’s own work.

The artwork was eventually removed but later reworked. Either way the Royal Mail’s interfearence had put the group on the public map.

During 2003 the band released several tracks as free downloads via their website blacksmoke.org, starting with a remix of Gimpo Gimpo by 808 State’s Andy Barker (as Kompressor) in January. Throughout the year the band teased the release of more material with short audio snippets of Blacksmoke Rising featuring vocals by John Lydon and an alleged cover of the Kittens Of Mass Destruction EP. Following more downloads between August and October and a BBC Radio 1 Breezeblock session Cauty and Fogarty eventually released some of their finished work as the Post-Terrorist Modernism EP, though at this point Jimmy had already started concentrating on the art side of things, leaving the musical side of Blacksmoke to James.

With the gas-mask wearing Queen image withdrawn the EP’s DIY cover now featured Jimmy’s 5-11 artwork instead, a set of three paintings depicting the destruction of Big Ben resembling the 2001 terrorist attacks on the World Trade Center.

Unsurprisingly the triptych caused a minor outrage in the public press, even making it to the front page of The Argus. While friends of those affected called the images ‘cheap and highly insensitive’ Jimmy himself explained that they merely highlighted the need to fight terrorism at home as well as in remote countries.

Any uncomfortable reaction to this new artwork may reflect the proximity of the subject. If Blacksmoke 5-11 depicted the government buildings in Baghdad or Kabul, would we pay attention? The war on terrorism starts here.Jimmy Cauty (The Argus, 5 Nov 2003)

A fourth painting, the so-called “Final Edition”, was released in 2006.

Not limiting themselves to just music and posters, Blacksmoke went on to open Blackoff, a temporary gift shop at London’s Aquarium Gallery in 2004, featuring items based around the theme of government-induced terror.

Most things in the shop relate to the government’s Preparing For Emergencies leaflet that was recently mailed out to every household in the country, which perpetuated the idea that ou are going to need to stock up on certain items before you retire to your bunker or hide under the kitchen table. So we’ve made some things the governmet recommends, and also some we think are bunker essentials.Jimmy Cauty (Nude, Dec 2004)

Elements of the PFE campaign’s logo appeared on various gift shop items, including ties, wrapping paper, and jigsaw puzzles with one piece missing.

The same year Jimmy appeared at the Big Chill festival (billed as Blacksmoke) to play a 1-hour DJ set over the movie Docklands Light Railway shot by Gimpo. An alternate version of his industrial ambient set later was aired on Resonance FM.

The band’s own anti-war related discography concluded with the relase of the limited 7″ single I’m Dreaming Of A Black X-Mas, an edition of 500 copies released and only available on Christmas day 2004 via their gift shop.

From 2003 onwards Blacksmoke also comissioned a couple of remixes for other bands and artists including a-ha and The Bloodhound Gang, as well as contributing two tracks to the 2005 Disney movie Herbie: Fully Loaded, but it wasn’t until 2006 that the band (now without Jimmy) shifted their focus from the war on terror to the war on global warming and more original output with Danger Global Warming.

The multimedia project compromised original images, music and video work created by invited artists, focusing on the central theme of climate change. The submitted material would have lead to Gallery Shows (featuring artwork incorporating the DGW hazard tape), music videos broadcast on TV networks worldwide and the release of a wide range of remixes of the original Danger Global Warming theme track written by James Fogarty, John Fryer and Hugh Cornwell (of The Stranglers). Among the list of confirmed contributors were prominent bands and artists including Afrika Bambaataa, Clint Mansell, Graham Massey, Junkie XL and the Utah Saints.

As the project kept on garnering public interest Keir focused on the Danger Global Warming project full-time, while at the same time James Fogarty was keen on recording another EP of new material instead. Fogarty decided to withdraw from the band to concentrate on his own work again, including the recording of tracks in a style similar to Blacksmoke’s earlier output as The Bombs Of Enduring Freedom. In 2021 he reactivated the band, releasing new tracks dealing with contemporary topics.

With an impressive list of contributors, to date only a small number of “recycled” version of the Danger Global Warming theme track and accompanying music videos have seen the light of day as the project was put on hold due, for personal reasons. As an enthusiastic supporter of the project, Roger Sanchez kindly offered to release a handful of club tracks via his Stealth Label, on numbered limited edition 12″ releases, featuring remixes by Trentemøller, System 7 and Sanchez himself. The wider range of recycled version presently remain unreleased but might see the light of day in the future.

Having left Blacksmoke Jimmy meanwhile had started working on his stamp-sized images full-time. Following the release of his book Stamps Of Mass Destruction he founded the Cautese Nationál Postal Disservice (CNPD), a postal service of the fictional country Cautese in late 2005.

On September 11th 2007 the CNPD officially appointed Croatian artist Filip Filkovic chief designer of all its future Postal Disservice stampage and declared “War Is Over!”. Filkovic had already been active as the founder of art collective Kunstterrorist since 2004, producing his own range of CNPD inspired stamps. 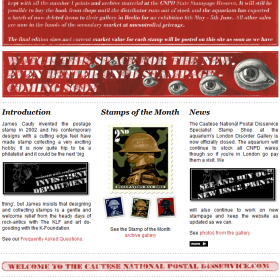 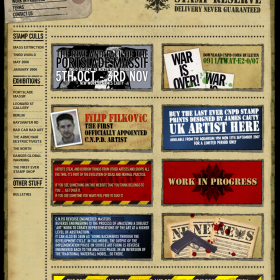 The CNPD continued to create more art and imagery including Bad Car, Bad Art and The Armchair Destructivists until 2008 when all of the CNPD’s previous stampage work produced between 2003 and 2008 was compiled on a single hard drive and offered for purchase through the Aquarium Gallery’s webshop for a mere £2,800,000. Since the market has not been flooded with reprints since we assume the hard drive remains unsold.