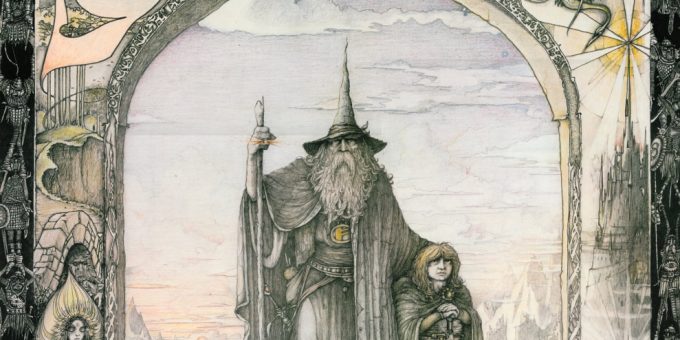 Between the second half of the 70’s and the early 80’s Jimmy Cauty drew a couple of posters which were all printed and published by British art retailer Athena.

Lord Of The Rings

Jimmy’s Lord Of The Rings poster is probably the most well known of them all, being one of Athena’s best-selling posters of that time. Due to its popularity it has been reprinted various times since its initial release and therefore regularly pops up on eBay. The reprints all feature a white border, though.

A guy from Athena actually flew in a helicopter to my house to get the poster and gave me £500 and 12 per cent royalties, which I thought was an absolute fortune ‘cos I was on the dole. Apparently it was mostly student nurses who bought it.Jimmy Cauty, The Face, Apr 1991

Over the years various artists have created a number of posters and artworks which were clearly influenced by Jimmy’s original work.

The Walt Disney company used an illustration by Spanish artist José Maria Manrique for a story in which Donald Duck experiences a vivid LOTR-influenced daydream, and one can cleary tell Manrique’s cover is based on Jimmy’s poster.

A more vibrant remake was sold on Etsy by American artist Rhett Whittington of which a larger version can be found on Rhett’s DeviantArt page.

The LOTR poster remake of Jimmy Cauty’s famous poster was one of my favorite projects I’ve done! […] There’s something about that older art that has more of a whimsical, story-book, and fantasy feel to it that I absolutely love, and tried to capture with my own art. Rhett Whittington

The poster has also inspired a couple of homages, like “Selvarin” by Argentinian artist Cáceres P. Martín E. which can be found on DeviantArt as well.

And then there is a parody poster called The Habit which is also… “highly influenced” one might say. 😉

Jimmy’s second poster based on the books of J.R.R. Tolkien is drawn in a similar style yet much darker than Lord Of The Rings (and a lot more grim than you probably would expect from a children’s book). The Hobbit remains a hightly sought-after poster by both KLF and LOTR fans alike and is rarely sold anywhere.

Influenced by the works of English author and esotericist John Michell, The Stone Circles is a triptych on the theme of famous stonecircle sights in Southern England, including Stonehenge…

Athena issued all three of them as greetings cards as well.

The King Of Elfland’s Daughter

Painted in 1977 The King Of Elfland’s Daughter was featured as the cover artwork for the concept album by Bob Johnson and Pete Knight (of Steeleye Span) based on Lord Dunsany’s fantasy novel of the same name.

While their paths did not cross again until 10 years later, the album also features the vocal talent of a certain PP Arnold…

Jimmy’s 1978 poster The Gift is a smorgasbord of different elements. A group of astronauts meet the inhabitants of a fantasy realm where UFOs roam the sky and a dragon rests by a river, all observed by a group of robed figures.

The poster’s centerpiece slightly resembles the classic “The Wedding Of The King” artwork by the Brothers Hildebrandt who themselves have created some iconic illustrations for Tolkien’s work.