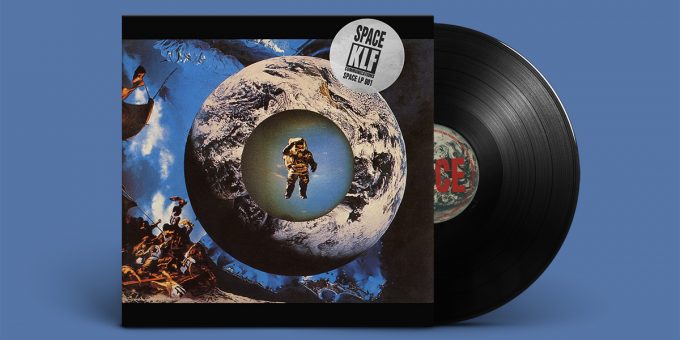 Space started life as a collaboration between Jimmy Cauty and Alex Paterson. The album was first announced in early January 1990, albeit as a proper Orb album at the time.

There is a triple LP called ‘Loving You’ on the way, consisting entirely of different versions of their single, as well as another double LP of new material called ‘Space’.Chris Mellor, Record Mirror, 6 Jan 1990

We hope to see The Orb album “SPACE” surface on KLF Communications in the next few months.KLF Information Sheet #8, 1990

… and the album’s accompanying press release (see below).

However, Jimmy and Alex split in April 1990 with the latter leaving to work on The Orb fulltime. Cauty then (allegedly) deleted Paterson’s contribution and simply released the album under the Space alias instead (read the FAQ for more details).

[Space is] a record for 14 year-old space cadets who want to take acid for the first time. It all came out in one long process. It was all done on the Oberheim keyboards. There were loads of samples, different bits and pieces chucked in all over the place. There’s some really good big-sounding classical bits that have got a really deep sound, and they were all sampled and looped up. I hadn’t got anything written, so I just jammed the whole thing. I started on a Monday morning and by Friday it was all done.Jimmy Cauty (Sound On Sound, Apr 1991)

The album’s front cover borrows the lower left part from French painter Théodore Géricault’s Raft Of The Medusa with the survivors of the Méduse dressed in white KLF shirts.

Space got a rather extensive press release sent out by KLF Communications in 1990.

Distribution Girl – Part Five.
June 1990. The Party is over. What is left of the E Generation have all gone off to Glastonbury. Distribution Girl sits on the floor alone. It’s 3.23 A.M.. The T.V. lies broken in the corner. An empty record deck spins silently by her bed. Last year’s flyers lie scattered across the floor.

“Was there any point to any of it.” was a half formed thought that almost drifted across her brain. She picks up the unopened album mailer. She already knows whats inside. Can she be bothered opening it? She does. A K.L.F. Communications Promo’ L.P. and press release. She shuffles off to bed. Lying there she attempts to read the press release.

“SPACE”. A FORTY MINUTE ROLLERCOASTER RIDE AROUND THE SOLAR SYSTEM, WRITEN AND PRODUCED BY J.CAUTY.
ORIGINALLY INTENDED TO BE THE ORB’S DEBUT ALBUM. NOW SIMPLY “SPACE” BY SPACE FOLLOWING THE SPLIT OF THE ORB IN APRIL 1990.

“How boring, another group splits”

The press release rants on. The odd line caught her eye.

“As if anybody is going to be interested at this late stage.”

She puts on her headphones. Lets the needle drop on the record. Pulls the light cord above her bed and lies back info the darkness.

Thirty five minutes later Distribution Girl is hurtling through the Void. Re-entering the Earth’s Stratosphere at thirty six thousand M.P.H. Her bed is shaking violently. The room is spinning out of control. She tries to reach for the record player but it has turned into a bank of Retro Rocket Booster Controls. The Re- entry roar is almost too loud for even her ears to take. Finally sucked from her capsule, Distribution Girl is falling through the clouds. The only sound is that of her heart beat. The Pacific Ocean is approaching at twenty three feet per second.

On top of that a couple of mailorder singles had flyers with the album’s artwork on the front and the release date on the back snuck into them as well.

If you want a wholly original piece of music look much further. […] If, on the other hand, the idea of an aural equivalent of NASA controlled by Donald Duck appeals the peel off that sneer, plug in the headphones and jump into the cockpit next to Timelords/Orb/KLF member Jimmy Cauty.
Jack Barron, NME, 16 Jul 1990

Listening to ‘Space’ is like being hurtled back in time to the days of mellifluous electronic doodles by over-intelligent Geman progressive rock groups like Amon Duul II. […] This is head music for the ’90s, a possible soundtrack to altered druggy states, and it is immaculately and intelligently crafted.
Mark Prendergast, Record Mirror, 16 Jul 1990

The album is presented as one single track, therefore tracktimes are estimates based on silent sections inbetween.

Rumor has it that the originally scheduled (though unconfirmed) 2LP tracklist was also meant to include a version of The Orb’s “Ultraworld” which is not too unlikely considering it is a Paterson/Cauty production as well.

Both the CD and LP (albeit to a lesser degree) have been bootlegged in the past due to the original’s rarity. Make sure to check out our FAQ to spot the differences!