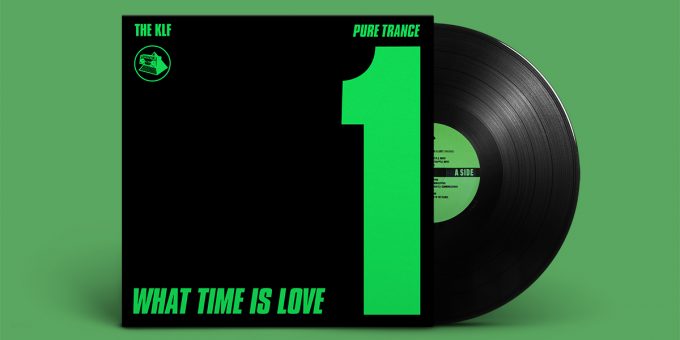 One of the cornerstones of The KLF’s history, and a departure from their previous sample-riddled output as The JAMs and their brief pop detour as The Timelords. Instead What Time Is Love embraced the emerging rave scene and the style of music it brought along with it.

We were drawn to the purity of that kind of music, of music that has no form, nothing to write about, no reference points and no irony.Bill Drummond (Sounds, 24 Nov 1990)

What Time Is Love was meant to kick off The KLF’s Pure Trance series but failed to gain significant recognition in the UK at first, not least due to a self-imposed lack of promotion from both the band and their publisher.

We got the first tune, ‘What Time Is Love?’, done fast. It took 15 minutes to write at Jimmy’s house one night and we mixed it the next morning. We thought it was OK, gave it to Rough Trade and told them to put it out with no promotion. […] In the past we’ve been perceived as very much a music paper type band that exists in that little field. That’s why we didn’t send the single to the media at all. We did send it out to clubs though and initially got zilch reaction. So we forgot about it.Bill Drummond (NME, 26 Aug 1989)

However, while Bill and Jimmy were busy shooting The White Room their ’15 minutes single’ slowly grew into a hit single in European clubs.

It came as a complete surprise. People from an Italian company rang wanting to license the single. So we set up all these meetings which they never came to. The next thing we know the Italians have set up their own band, The KLFS and they’ve done their own acidic cover of the tune!Jimmy Cauty (NME, 26 Aug 1989)

The ever growing list of cover versions popping up all over the place would eventually lead to The KLF compiling them onto their own What Time Is Love Story mini LP later.

To this day the original version of What Time Is Love? seems to remain the duo’s proudest moment as The KLF.

You know the biggest rush we’ve had this year? Going to Sunrise a couple of months back and seeing 5,000 people dancing to ‘What Time Is Love?’ – a tune I made in my bloody bedroom!Jimmy Cauty (NME, 26 Aug 1989)

[The] pair offer up a sleek, sinuous and mildly trance-inducing 12-inch single that is an excerpt from the score to the film “The White Room,” on which they recently collaborated. The cool, sophisticated sound on most of the record – there is a harsher-sounding instrustrial passage – is very different from the craziness found in the twosome’s earlier outings. But it’s underpinned by an electro-dance beat strong enough to earn it some club play.
Tom Popson, Chicago Tribune, 24 Nov 1989

Everyone remembers “3am Eternal” and “Last Train To Trancentral”, but the one that caught on like a virus was surely “What Time Is Love?” Its circular keyboard motif, suffused with the new club culture’s combination of illicit thrill and menace, went beyond the sensory distortion of straight acid house. Somehow, it was pop too. […] “What Time Is Love?” embedded itself in the pop landscape as the moment when dance music realised it could eat the world alive. Within weeks of its release, no club would play it, but no club needed to. It was already on every radio in the land, changing everything for ever.
Andrew Harrison, Unknown 'Club Classics' Feature

There are no official mix names stated anywhere on the sleeve or labels, though according to the master cassette inlay they are the “Original” and “Sub Bass Acid” mix respectively. Later releases including the A-side mix usually labeled it as the “1988 Pure Trance Original” (or simply “Original”) as well.