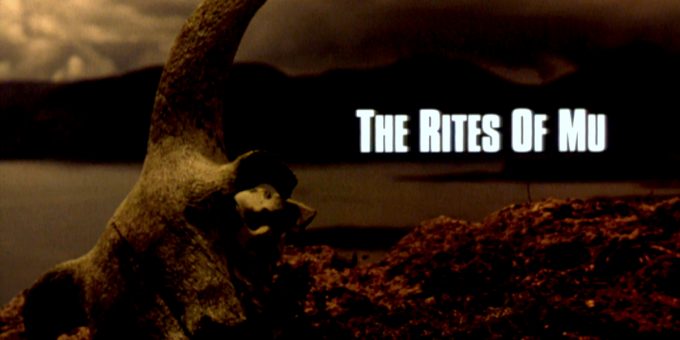 Apparently the KLF disliked the constant attention they got from the dance and pop music worlds: in the form of requests for PA’s, remixes etc., and the constant questions they got asked. Indeed they even refer to the ‘four handmaidens of evil: WHO WHAT WHERE and WHY’. So as Drummond states in info sheet 13 they decided to hold the Rites of Mu to make “the questions we get asked and are unable to answer” redundant. Of course other reasons for the Rites are more probable: they wanted to hold a good party, they would get a lot of press coverage, and it would increase their enigma. Whatever the reason then, for the 1991 Summer Solstice, The KLF entertained a selection of music industry figures, journalists, etc. on Isle Of Jura in an event known as the Rites of Mu.

The invitation said ‘The KLF require your presence. You’ll be transported to the lost continent Mu. Bring your passports’. Each guest was given a copy of the following statement as they travelled to Jura, by train, plane, car, bus, and boat on Friday 21st June:

‘THE RITES OF MU.

‘SINCE THAT FATEFUL DAY WHEN MAN LEFT BY THE EASTERN GATE, FRUIT STILL FRESH IN HIS BELLY, THOSE FOUR BEAUTIFUL HANDMAIDENS OF LUCIFER _WHY_, _WHAT_, _WHERE_ AND _WHEN_ HAVE LONG TEMPTED BUT NEVER QUENCHED HIS DISASTROUS THIRST FOR KNOWLEDGE. THE KLF HAVE INVITED YOU TO JOIN THEM IN CELEBRATING THE RITES OF MU THIS SUMMER SOLSTICE, DURING WHICH THE FALL OF MANKIND MAY BE REVERSED, RETURNING HIM TO THE GARDEN WHERE THE REST OF CREATION WAITS.

‘THE MOST BEAUTIFUL, YET MOST EVIL, OF THE FOUR HANDMAIDENS IS_WHY_. SHE EVEN NOW MAY BE TEMPTING YOU TO ASK QUESTIONS, WHEN ANSWERS ARE NOT ONLY NOT NEEDED BUT COULD NEVER BE GIVEN. SINCE CELEBRATING THE RITES OF MU FOUR SEASONS PAST, THE KLF’S MOMENT HAS COME; SHIMMERING AND DAZZLING LIKE THE HAUNTING BEAUTY OF AURORA’S RACE, IT IS DESTINED ONLY TO FADE. WHILE THE MOMENT LASTS THEIR STADIUM HOUSE TRILOGY REVERBERATES AROUND THE GLOBE, THE REQUESTS FOR LIVE SHOWS, INTERVIEWS, TV APPEARANCES, REMIXES, PROMOTIONAL TOURS AND COMMERCIAL ENDORSEMENTS HAVE SPEWED FORTH RELENTLESSLY FROM THEIR FAX MACHINE.

‘_WHY_, _WHAT_, _WHERE_ AND _WHEN_ HAVE BEEN VERY BUSY; THEIR SEDUCTION TECHNIQUES NEAR-PERFECT. THE KLF, WITH REGULAR FEET OF CLAY, HAVE WEAKENED AT TIMES AND HAVE PRETNEDED TO ANSWER THE UNANSWERABLE. THEY TOO HAVE TRIED TO UNDERSTAND INSTEAD OF ACCEPTING THE UNFOCUSABLE, BEAUTIFUL TRUTH OF THE MYSTERY THAT LIES AT THE HEART OF POP’S PASSING MOMENTS.

‘AS WELL AS ASKING YOU TO ACCEPT THE CONTRADICTIONS OF THE ABOVE WE HOPE THAT YOU WILL GIVE YOURSELF FULLY TO THESE THREE DAYS, ACCEPTING WHATEVER THE ELEMENTS TIP OUR WAY; WHATEVER MILD PHYSICAL STRAINS MAY BE PLACED UPON OUR BODIES AND SAVOUR THE UNDERVALUED QUALITIES OF WAITING, AND MAYBE AFTER IT IS ALL OVER WE WILL UNDERSTAND THAT THERE IS FAR LESS TO UNDERSTAND THAN WE EVER KNEW.’

The guests were welcomed from the ferry by Mu passport control officer Drummond in peaked cap and shades, who checked their passports and stamped them with a pyramid blaster stamp. They then allowed themselves to be dressed in yellow ceremonial robes, and led in a chanting procession by a white robed high priest of Mu with Horned God headpiece, over the moors to a bonfire beside a huge (20m?) wicker man, arms raised with weapons poised, head looking up to the sky. The four angels of Mu, in white dresses, with flower head-bands, rose from the sea, and joined the celebrants. The high priest addressed the crowd in ‘a tongue that no longer exists, at least not in this world’. What did the KLF have in store, or was it the Justified Ancients Of Mu Mu controlling the KLF? As the ceremony reached its climax at midnight on the longest day, it was still light. The priest encouraged the guests to direct their psychic energy towards the wicker man, chanting ‘Burn Burn Burn’ and the idol burst into flames with many explosions!!! What lay ahead was ‘enlightenment … or madness’. After the ceremony was over the guests were treated to a huge party. The next day is unrecorded but judging by the statement it involved savouring the undervalued qualities of waiting. However they spent the time, by Sunday 23rd of June, the KLF had transported the guests to the Liverpool Festival of Comedy, where, hooded, they joined them on stage for an accapella rendition of Justified And Ancient as Bill and Jimmy handed out ice creams from an ice-cream van which they had borrowed. The total cost of the weekend was supposed to be around 70,000 ukpounds. But for what?

The event was filmed by Bill Butt, as were all the KLF’s public appearances, and edited for promotional use only. A Promo video of 5×2 min episodes was circulated in July 91. The soundtrack music is largely dark, sinister, and evil, often punctuated by sudden outbursts of the industrial ‘woooooo!’ sound from ‘It’s Grim Up North’. A narration by Scott Piering (their record plugger) proved that he couldn’t act. Each episode begins with the closing scene of the previous.

By sacrificing the wicker idol, somehow the KLF have reversed the fall of mankind! The film ends intriguingly with ‘America 1992 – the celebration continues’. Did they intend to have a Rites Of Mu in the US in 1992? Or is this just a reference to the America promotional campaign.

A new 1×7 min version appeared on ‘The Work’ promo video at the end of 1991, with the opening credits removed from each episode. There were rumours that it was to be screened on Channel 4 in the UK, or on MTV Europe, at some point that winter, but it wasn’t screened until after the retiral, on the shortest day 1992, on MTV Europe, with a re-recorded soundtrack and new narration as the 1×7 min version. On the 26th of August 94 another (new?) version was shown at the NME film season in a triple bill with the Beatles ‘Magical Mystery Tour’ and Echo and the Bunnymen’s ‘Shine So Hard’ perhaps this version makes more of the mystery tour aspect. It also features as a bonus track on the ‘Work’ DVD.

5 thoughts on “The Rites Of Mu”