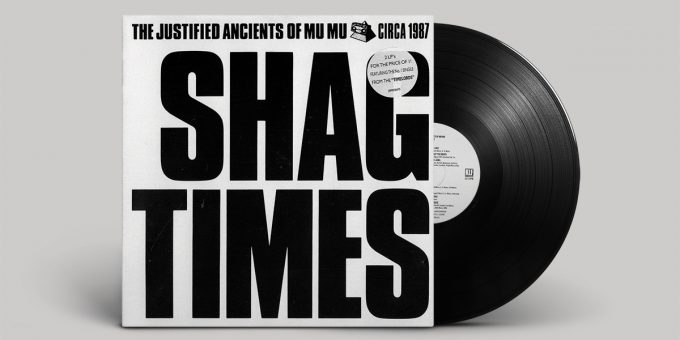 Shag Times is a compilation album gathering various JAMS singles as well as a number of alternate versions and remixes.

The Jams have deleted all their early 7 and 12 inch singles. In their place, they are releasing the double lp “Shag Times” (also available for the first time on CD) at a budget price of under a fiver. “Shag Times” is released on January 14th on the KLF label, distribution via The Cartel.

Record One contains all the A-sides of their singles plus a track from each of their albums, “1987” and “Who Killed The Jams”. Record Two comprises various instrumental mixes which were originally pressed in limited quantities available only to club DJ’s.

These tracks were recorded and mixed before we all leapt into the acid bath.Mick Houghton, Shag Times Press Release

Both the LP’s inner sleeve and the CD’s booklet feature reproductions of various selected press articles about The JAMs which appeared in UK music magazines between March 1987 and April 1988.

A similar compilation (albeit missing most of the tracks from the second disc) later got released as The History Of The JAMs by TVT Records in the USA, featuring the artwork from Who Killed The JAMS? instead.

Since both were released back to back, full-page adverts for both Shag Times and The Manual appeared in the January ’89 issue of The Catalogue.

[Two] cheers for those clever one-time aural anarchists who tried to hide from all their tangles with the copyright laws under the title The Justified Ancients Of Mu Mu. [Their] double-album retrospective […] starts with their greatest moment of musical piracy, and progresses towards their own genuine pop hit, Doctorin’ The Tardis. […] All very clever but it’s a shame their first track was also the best. By the second side, they’ve reverted to mostly instrumental dance-floor background pieces. […] As the band says, this is a product with a “short shelf-life guaranteed”. And that can be taken two ways.
Robin Denselow, The Guardian, 6 Jan1989

‘Shag Times’ actually stands up as a valuable addition to the JAMs school of scandal [and] is the easiest means available to retrace King Boy and Rockman’s steps through 1987. […] Having rifle everyone else’s vault, it seems only logical that the JAMs should sample themselves. In the process they remind us of just how hot these River Clyde MCs were. […] ‘Burn The Bastards’ – ie, ‘JAMs Have A Party’ – would melt any dancefloor, while ‘Whitney Joins The JAMs’ remains their funniest moment. […] Like SAW, whom the JAMs greatly admire, these charlatans of the mixing desk are blessed with a gut instinct for the BPM route to the heart.
Keith Cameron, Sounds, 7 Jan 1989

‘Shag Times’ tells a peculiarly British pop parable: how a self-confessed pair of ‘cynical’ music industry figures saw the possibilities of the new sampling technology, constructed a moving polemic (‘All You Need Is Love’), became seduced by the textures of disco (‘Whitney Joins The Jams’), and ended up with a novelty Number One record (‘Doctorin’ the Tardis’).
Jon Savage, The Observer, 8 Jan 1989

[A] double compilation LP that concludes the first phase of a fascinating two-year history. […] Whether your limit of knowledge of these people is the ‘Doctorin The Tardis’ hit, or whether the only things you haven’t got are the remixes, it’s a record not to be missed.
Chris Mellor, Record Mirror, 14 Jan 1989

They’re all here: the highs and lows, the power and the passion, from the controversial versions of “All You Need Is Love” and “Whitney Joins The JAMs”, to the pure pop puerility of “Downtown” and “Doctorin’…”. Plus a bonus album of bonus beat mixes ranging from 90 through 125 BPM. All lovingly packaged in a gatefold sleeve that reproduces the press that documented the whole sorry, sordid tale. From bovver to bar-coding.
Unknown, The Catalogue, Jan 1989

Though hardly new as a technique […] JAMMs’ buccaneering attitude to the laws of creative ownership helped re-open the whole debate and, what often seems neglected in the furore, made a sequence of very amusing juxtapositions, of which The Timelords’ Doctorin’ The Tardis (included here) is the tamest. A great party album.
Mat Snow, Q Magazine, Feb (?) 1989

It’s the same music in a different kitchen and if you got the joke the first time round, the sample remains the same.
Michele Kirsch, NME, 14 Jan 1989

Not once do the Justifieds succeed in making pop look silly – they are always the stooges. […] “Shag Time” [sic] is so bad that, given a beatbox, a crate of Jack Daniels and a roomful of dossers, I could do it, and the Justifieds would say that hits is precisely their point. […] should be deposited in some sort of bin.
David Stubbs, Unknown

Some copies of JAMS CD3 suffer from the infamous PDO “bronzing” problem.

On both releases the last seven tracks are not listed by name but (rather inaccurate) BPMs only. Furthermore the second disc has been rumoured to be the unreleased Towards The Trance album listed in some KLF info sheets.