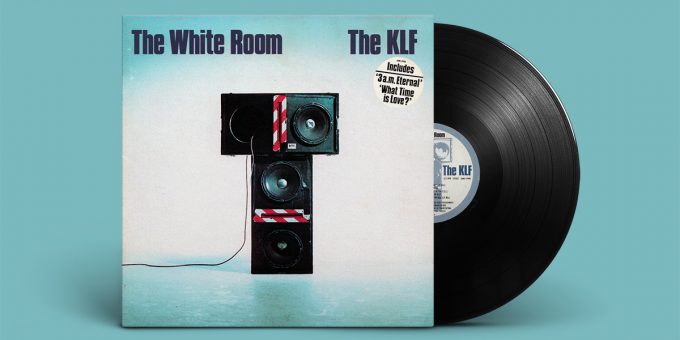 While their previous antics as The JAMs and The Timelords had already firmly put Bill and Jimmy on the map of British dance music, The White Room is without a doubt the album that finally catapulted The KLF into mega-stardom, spawning three hit singles of which one (3 a.m. Eternal) got them to Number One in the UK (their second after Doctorin’ The Tardis).

The album is divided into two parts – while the tracks on Side A are of a more upbeat nature and presented as a mini live concert (the idea of which gets kind of lost on most international releases, see below) the flipside is more of a downtempo affair.

Apart from the well-known singles that were based upon the Pure Trance originals, the album consists mainly of reworked versions from the unreleased motion picture soundtrack.

JC: At one stage it was going to be some huge mix with all these separate songs we recorded crossfaded, and a few juicy bits and pieces thrown in between.

BD: Some of it was recorded incredibly fast, like in half an hour. Other things seemed to take years, like the songs. Some of the tracks we’ve done here we were working on this time two years ago. We seem to be in a constant process of re-working our past.Jimmy Cauty & Bill Drummond (Sound On Sound, Apr 1991)

Unbeknownst to the music-consuming public The KLF were also re-working their not-so-distant future as well since the album both opens and closes with the downtempo version of Justified And Ancient, at this point still featuring the vocal talent of Black Steel rather than Tammy Wynette.

Despite releasing a couple of additional singles not included on the LP The White Room remains the final album The KLF (or any of its various incarnations) would release before their departure from the music business.

‘The White Room’ is, to a large extent, The KLF playing safe. Anyone whose introduction to the JAMMS-Disco 2000-Timelords-KLF saga was via the ‘stadium house’ reworking of ‘What Time Is Love?’ last year, will be ever so pleased with this remarkably strong and cohesive LP.
Tim Nicholson, Record Mirror, 2 Mar 1991 (Album Of The Week)

There’s a hell of a lot of reasons to admire The KLF but I’m afraid ‘The White Room’ isn’t one of them. For the most it’s nothing more than background noise, and you’ve been paying attention to the lives and times of Drummond and Cauty you’ll know how dynamic ‘The White Room’ should be.
James Brown, NME, 2 Mar 1991

Indeed, this would indicate that [the album’s] release was little more than a cash-in on their new-found success […], where it not for the strikingly imaginative way in which the duo approached their task. […] A more subtle form of subterfuge than before, this LP will appeal to recent converts and hard core fans alike.
Iestyn George, Q Magazine, Mar 1991

It’s full of glorious studio trickery and dance weirdness […] but sometimes gets a little on the wearing side because – in between all the brilliant dance bits – Bill and Jimi keep trying to show us how kooky and weird they are with their strange chants and bleeping noises.
Unknown, Mar 1991

Track times for 3 a.m. Eternal and Church Of The KLF are estimates based on JAMS LP006 as the CD version combines both into one single track.

Please also check the FAQ for the differences between the original KLF Communications release and the international versions.

9 thoughts on “The White Room”