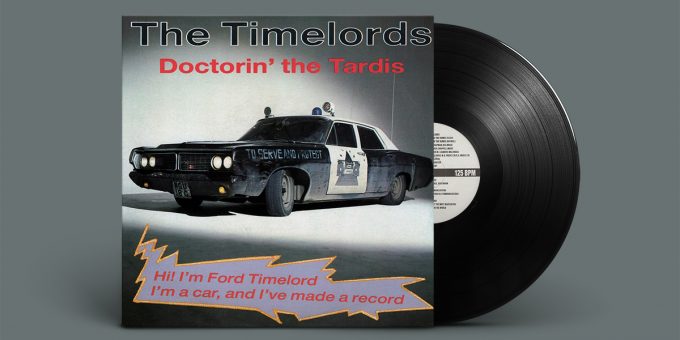 Built around the “Doctor Who” theme, Sweet’s “Blockbuster!” and Gary Glitter’s “Rock And Roll”, Doctorin’ The Tardis saw The Timelords climb to #1 in mid 1988.

We hope you enjoyed the irony of the JAMs making it to No1 in the UK charts with “Probably the most nauseating record in the world”, we did, we also enjoyed celebrating the trashier side of pop. But you don’t have to worry there will not be a Timelords follow up.The JAMs (Info Sheet #2, 6 Jul 1988)

A 12″ of alternate versions – some of them featuring Gary Glitter himself – was released three weeks later.

The record’s chart performance later inspired Cauty and Drummond to release their tongue-in-check step-by-step guide The Manual. Despite the single’s success they did not try to cash in on their new found attention with a follow-up single, though.

We occasionally come up with an idea which would make a good Justified Ancients Of Mu Mu track and we’ve still got lots of material dating back to that period. We’ve even got a guaranteed Top 10 song which we sometimes think about putting out under The Timelords name, but it would be a shame to destroy the beauty of an act having a Number One hit and then disappearing.Bill Drummond & Jimmy Cauty (Melody Maker, 10 Mar 1990)

Most of the promotion for Doctorin’ The Tardis was built around the Timelords’ front “man” Ford Timelord. Interviews with the iconic cop car appeared in various music magazines like Smash Hits and Record Mirror.

Promo whitelabels where sent out by Appearing, including a handwritten note by Scott Piering claiming the song was meant to “touch the nerves that respond to Dr. Who, Gary Glitter, The Sweet, and of course sing-along- football chants.”

People who buy it will have a sense of humour and there are lot of those people about. Fortunately!Ford Timelord, Smash Hits, Jun 1988

Landscape adverts also appeared various magazines, kicking off the tradition of later KLF/JAMs adverts in a similar format (albeit without their signature typeface yet).

The JAMMS attempt at The Novelty Hit. The notion of Handsome Bill grinning between Joyce Sims and Kylie Minogue in chartland is enough to make me forgive the agony this record brings to my life as I type.
Unknown

Doctorin’ The Tardis Picture Disc (Back)

Other notable international editions include the CD singles released on Somersault and Indisc which include all six mixes in CD quality, and the CD-Video release on Phonovision which includes the music video. However, since the CD-Video format disappeared again in 1991 you might have troubles finding a playing device these days.

3 thoughts on “Doctorin’ The Tardis”