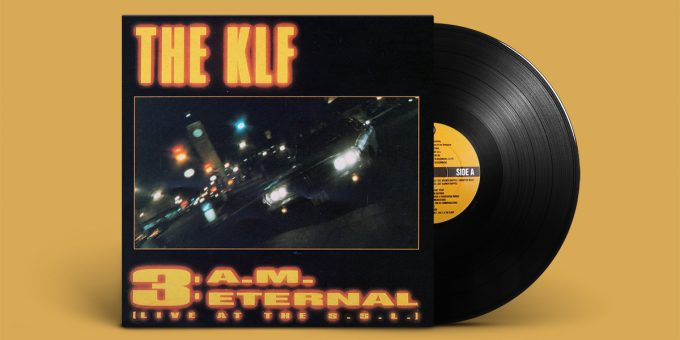 We always work with titles. [3AM Eternal] just seemed like the right answer to ‘What Time’.The KLF (Rage, 8 Jan 1991)

Like What Time Is Love? before it 3 a.m. Eternal is an updated and heavily remixed version of its Pure Trance predecessor.

Everybody’s saying ‘Oh God, can’t you write any new stuff?’ But we’re just saying that ‘3am …’ was an advance DJ copy and this was always the mix it was supposed to be.Jimmy Cauty (Record Mirror, 12 Jan 1991)
Besides, nothing is ever finished. It’s all work in progress. We’ll probably be producing remixes of [WTIL and 3AM] until they cart us off to an asylum.The KLF (Rage, 8 Jan 1991)

The KLF decided to keep large chunks of the bits sung by Maxine Harvey as well as the “Eternaaal” chants from the original but ditched Bill’s spoken bits in favour of newly recorded rap vocals. With Azat Bello not available at the time of recording these were provided by Ricardo “Da Force” Lyte instead who went on doing more vocals on The KLF’s The White Room album as well.

The single’s iconic “This Is Radio Freedom” machine-gun style opening was sampled from the actual Radio Freedom‘s station ID and was edited out on the “Radio Freedom Edit” (see KLF 005S below) later to comply with Radio 1 guidelines over the Gulf War.

Adverts for the single started to appear in Record Mirror and the NME in early January. Other than the record’s release date they did not give away any further information as usual.

While the chart success of What Time Is Love? might have taken international distributors by surprise the hype machine had finally shifted into gear with the follow-up single, and promotional copies & sheets started to appear in other countries as well, including German distributors Intercord…

… or Arista in the United States.

For all the allegations that Bill Drummond and Jimmy Cauty are wantonly zany, the fact remains that his record – like the previous one – is a magnificent, pulsating beast combining bleeps with body-heat, and swirly sounds with the soulful tones of Maxine Harvey.
Record Mirror, 12 Jan 1991 (Single Of The Week)

They’re now possibly better known for lighting expensive fires and their art/media terrorism, but when the KLF unleashed this spookily euphoric mix of chants, sax and dance fury they helped coin the phrase ‘stadium techno’. Like the Sex Pistols before them, The KLF digested the feeling of the underground and spewed it into the pop charts.
Mixmag, Nov 2001 (#34 in '100 Best Tunes Ever')

Tracks are repeated on B side.

The Radio Freedom Edit is similar to the “Live At The S.S.L – Radio” version with the alleged machine-gun sounds cut, starting with the very first bass drum and P.P. Arnold’s “KLF, u-hu u-hu…” instead. For reasons unknown it also lacks the second half of the breakdown.

A similar version later appeared on the US promo CD though with the full breakdown again. Both variants fade out on Arnold’s final “KLF…” chant and before Scott Piering’s “Ladies And Gentlemen…” announcement.

Whilst the version on the 7″ promo does not have a distinct name – a sticker on the sleeve only stating ‘machine gun intro edited out’ – both are usually referred to as the “Radio Freedom Edit” even though only the latter is actually labelled as such. This is most probably due to the similar openings of both versions, leading to fans retroactively attributing the mix title from that release to the version on KLF 005S as well.

Exclusively released in the US as a limited pressing of (reportedly) around 120 copies, this 12″ by Arista includes an alternate version of the “Live At The S.S.L.” mix featuring a radically different intro. Starting with Scott Piering announcing “Ladies and Gentlemen… please welcome, live on stage, The K-L-F!” the track itself opens on a drawn-out intro and some otherwise unheard vocal bits by Ricardo Lyte before it segues into what is pretty much the standard version.