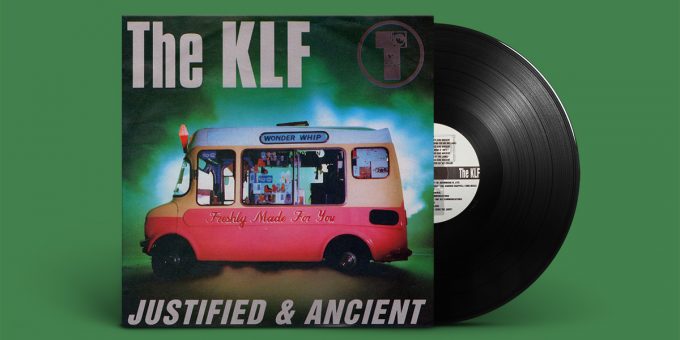 Justified And Ancient is the final single commercially released by The KLF in 1991, considering America: What Time Is Love? had already been released in the US a month before. Since the chorus had already appeared on 1987 it could also be considered the one the longest in the making.

An updated version featuring the talents of Errol Nicholson had already been included on The White Room the same year before, and for the single release the duo intended to record a more radio-friendly mix with resident vocalist Maxine Harvey. However, they felt the newly recorded vocals lacking and were close to dropping the single altogether, when Jimmy suggested to bring in a rather unusual guest singer – none other than the First Lady of Country Music herself.

Jimmy turned to me. ‘What this song needs, Bill, is Tammy Wynette.’ Jimmy is always right.Bill Drummond (45)

They Called Her Up In Tennessee

A couple of phone calls and a rewrite of the original lyrics later, Bill headed to Tennessee the next week to meet Wynette and had her record vocals for their song. Wynette was not used to perform over a pre-recorded backing track, though, and the recording session turned out not as straightforward as Bill had hoped. However, back in London the duo was able to adjust her vocals to the track with the help of some new studio equipment.

With a rather unconvential track and the instant star appeal of featuring Tammy Wynette once again the duo had ticked all the right boxes, and once the single had entered the UK charts at #5 another Number One seemed to be inevitable. However, despite everybody’s predictions Justified And Ancient was denied a No. 1 spot due to the untimely death of Freddie Mercury and the subsequent re-release of Queen’s Bohemian Rhapsody in November 1991.

A singer dying always messes up the agenda.Bill Drummond (45)

While the single went to Number One in several other countries, The KLF had to content themselves with only a New Year’s Number Two slot in their own home market instead.

Adverts for Justified And Ancient started to appear in the NME during the second half of November. The ad did not give away the single’s name, only reading “Freshly Made For You” instead as a reference to the ice-cream theme.

To further promote their single after its release The KLF also released a full-page A3 advert in the following issue of the NME, featuring the single’s cover artwork taken by photographer Paul Graham and Scott Piering’s narrated lyrics from the song’s breakdown.

Similar full-page adverts also appeared in local industry magazines all around the world.

Half of the Smash Hits office is sick to death of this record because the other 50% of us insist on playing it 99 times a day.
Smash Hits, Nov 1991 (Single Of The Fortnight)

‘Justified And Ancient’ lacks the sheer frantic rush of ‘Last Train’ and the gobsmacking gonads of the remainder of the Stadium House trilogy, but in a dance world riddled with the humourless, de-humanized likes of Altern 8 and Bizarre Inc (bleep bloody bleep, as Roadrunner once said) The KLF model a spiritual crown which elevates them several tower blocks above their amateur peers.
NME, 7 Dec 1991

The general catalogue number “KLF 099” and the mix title “Make Mine A ’99′” are references to a specific kind of ice cream, keeping with the overall theme of the ice cream van. You can read the FAQ to find out more.

(it probably also allowed The KLF to circumvent the question whether the follow-up single to KLF 008 should be 009 when that number had already been attributed to the 1989 issue of The Manual and the subsequent releases where either unreleased or limited at best – Ed.)

A and B side labels just read “TAMMY” and “TONY” respectively, where the former is a reference to Tammy Wynette performing vocals on the A side, and the latter to Tony Thorpe having mixed the B side version. As the mix title suggests this is the only official KLF Communications release on which the extended version of the “Stand By The JAMs” version can be found.

7 thoughts on “Justified And Ancient (Stand By The JAMS)”