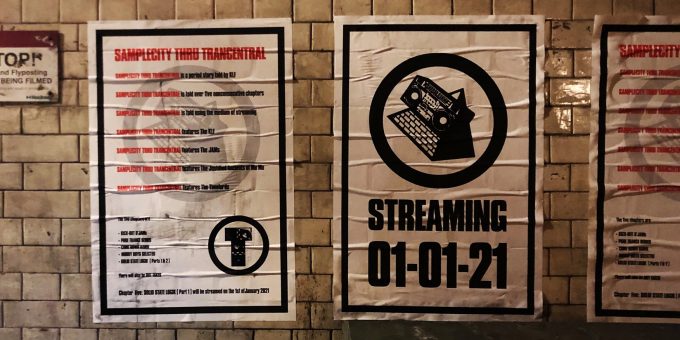 In a surprise move not even the most optimistic follower might have expected, a compilation called Solid State Logik has officially hit digital streaming services this morning, including all hit singles from The Timelords, The KLF and The JAMs released between 1988 and 1991.

Officially announced via two fly-posters put up under a railway bridge on the Kingsland Road in London, this marks the beginning of a series of re-releases titled Samplecity Thru Trancentral, seemingly spanning the whole back catalogue of Bill and Jimmy under their various guises between 1987 and 1992.

For those of you who cannot make it to Kingsland Road, further information can be found on the official KLF YouTube channel along the remastered original videos as well as a redone clip for the KLF vs. ENT version of 3 a.m. Eternal.

KLF have appropriated the work done between the 1st of January 1987 and 31st of December 1991 by The Justified Ancients of Mu Mu, The Timelords [and] The KLF.

This appropriation was in order to tell a story in five chapters using the medium of streaming.

The name of the story is SAMPLECITY THRU TRANCENTRAL.The five chapters are:

If you need to know more about the work done by The Justified Ancients of Mu Mu, The Timelords or The KLF, you can find truths, rumours and half-truths scattered across the internet.

The actual facts were washed down a storm drain in Brixton some time in the late 20th century.

Further information can be found on a poster, fly posted under a railway bridge on the Kingsland Road in London on the 31st of December 2020.

One of the two fly-posters also talks about possible outtakes to be part of the series. Whether this means alternate versions of existing tracks or completely unreleased tunes remains to be seen.

20 thoughts on “Streamtime In Lake Jackson”