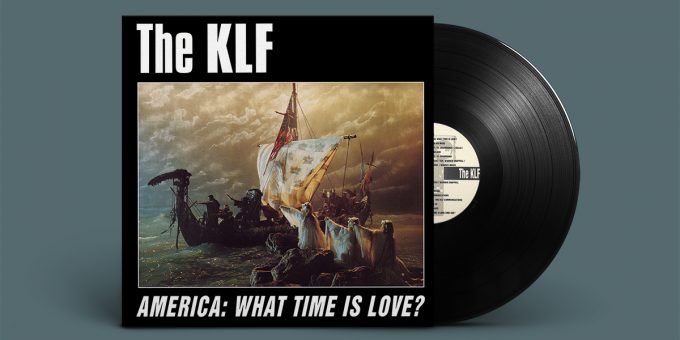 America: What Time Is Love? is a beefed-up, guitar-heavy remix of The KLF’s 1990 Live A Trancentral version in celebration of the 1,000th anniversary of the discovery of America by The Justified Ancients Of Mu Mu in 992 (or so they claimed). While the single’s slightly updated verses were once again performed by Azat Bello, AWTIL also features the vocal talent of Glenn Hughes (of Deep Purple fame) during refrains.

There’s always been a rock element to our dance music.Bill Drummond (NME, 29 Feb 1992)

Despite being listed as a 1992 single, US releases of America: What Time Is Love? were published on Arista four months ahead of the UK release on KLF Communications.

The UK release of America: What Time Is Love? was first announced through an 1/4 page advert in the NME on 22 February 1992, including a quote from the lyrics sung by Azat Bello.

One week later a full page advert appeared in the NME on 29 February 1992. The ad features an image of The KLF’s T Speaker wrapped in a US flag with small pyramid blaster logos replacing the stars, as well as a transcription of the single’s intro as narrated by Scott Piering.

In the year of our Lord 992 The Justified Ancients Of Mu Mu set sail in their longboats on a voyage to rediscover the lost continent. After many months on perilous stormy seas, their search was fruitless.

Just when all seemed lost, they discovered… America!KLF Advert

More proof that this band is pop’s answer to Steven Spielberg (a compliment really!) […]
Select, Feb 1992

Hell’s bongos, this’ll blow your very skin off! An unflippin’believable power-pop anthem with mentaaahl metal guitars and Wall Of Sound shrieks so far over the top they’re binging round the sun and never coming back.
Smash Hits, Feb 1992 (Best New Single)

The whole bizarre concotion’s brilliantly bonkers as usual. But I wonder if there’s any chance of them finding something genuinely new up the sleeves of their next set of daft costumes?
Melody Maker, 22 Feb 1992

“America: What Time Is Love” achieves the usual KLF feat of making everyhing happen at once: acid, rap, hardcore, broadway, opera, novelty, hit. The B-side, “America No More”, uses the helicopters of Apocalypse Now and radio soundbytes to compare the Gulf War to Vietnam, investing our ideas of pleasure (drum-thunder = bombs, bagpipes = armies) with terror. This is the kind of thing Conrad Boehmer could create if he’d restrict himself to four minutes of relevance: chilling musique concrete which achieves musical coherence via political suss.
Ben Watson, The Wire, Jun 1992

Limited gift edition of 50 copies for friends and relatives.

The 2-track 12″ single featuring the full 9 minute version of AWTIL is included in Lazlo’s original discography but not listed on Discogs. A quick survey revealed that nobody seems to own a copy of this particular release so chances are it might not exist at all…

January: What Time Is Love? drops the lyrics during the refrains and the recital of city and state names during the second half of the track. It also replaces the spoken intro with a bagpipe performance of “Auld Lang Syne”.

Pressed in a limited run of 20 copies Bootlegs exists and are presumed to have been produced by Mike Dutton as the lettering in the runout grooves of this and the single-sided Madrugada Eterna bootleg share a lot of similarities.

5 thoughts on “America: What Time Is Love?”