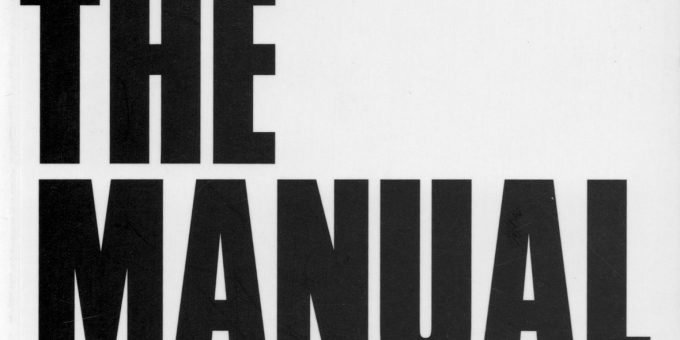 The Justified Ancients Of Mu Mu reveal their zenarchistic method used in making the unthinkable happen.

The Manual got published in 1988 following the success of Doctorin’ The Tardis by The Timelords. In their book, Bill Drummond and Jimmy Cauty lay out a detailed plan for how to have a novelty pop No. 1. starting from a position of no money and no talent.

As The Timelords, Jimmy Cauty and I set out to make a post-modern novelty hit. We wanted to make a record that came from nowhere and annoyed the hell out of people. Afterwards I wrote this book. Basically it said you had to be on the dole, watch Top of the Pops every week and if you had any instruments you had to get rid of them.Bill Drummond

With a top spot already under their belt the duo was convinced enough of their guide to even offer a money-back guarantee to anybody who would not score a #1 single after meticulously following the steps layed out.

The book also serves as an excellent guide to the music industry and the rules of pop, as well as a description of the fun that Bill and Jimmy had being The Timelords. It also includes various pieces about some of The KLF’s collaborators.

In retrospect Bill has admitted that The Manual was obviously never meant as an infallible step-by-step guide to guaranteed chart success but to give the reader a push into the right direction instead.

[I wanted to] be able to say to people, ‘Don’t be afraid. If you want to do something, just go ahead and do it, but be prepared to take the blame, to feel the fall. Don’t sit around waiting to be asked, to be given permission. Just get out there and do it.’Bill Drummond (The Manual)

In 1999 a revised pocket-size edition got released by Ellipsis (ISBN 189985865-2) featuring an introduction by Jon Savage, and the short story “In Praise Of Council Homes” in which Bill muses about their time as The Timelords.

Of all the books I did, I particularly like the pocket size of the reprinted edition of The Manual. The original is the original, yes, but the reprint looks nice.Bill Drummond

A German 2CD audiobook narrated by Bela B. (drummer of German punk band “Die Ärzte” and long-time KLF fan) was released in 2003, featuring a spoken intro/outro by Bill.

Austrian dance band Edelweiss are probably the most prominent example of another artist scoring a Number One by following the Golden Rules. Their single “Bring Me Edelweiss”, which got released in late 1988 and is heavily based on the refrain of ABBA’s “SOS”, reached the #1 spot in five different countries (including New Zealand) and went on to sell five million copies worldwide.

Milton “I Can See It In Your Eyes”

In 2002 German director and writer Paul Plamper adapted The Manual into the audiobook “Top Hit leicht gemacht” (“Top Hit Made Easy”). The one-hour long radio drama follows the story of unemployed Thomas Herford (voiced by actor Milan Peschel) who takes advice from the book and attempts to score his own Number One record, and together with his producer (actual producer Olsen Involtini) they write the house track “I Can See It In Your Eyes“.

Back in the real world, Involtini later decided to play the song to a manager from EastWest/Warner who liked it so much they decided to create the band Milton and give the single a proper release. Though “I Can See It In Your Eyes” got to #37 only it still showed that some of the Golden Rules still applied even 15 years after The Manual‘s initial publication.

This book is a day by day, step by step manual as to how anybody on the dole with no previous musical experience, can within these three months of purchasing this book have a number one single in the official U.K. charts (see inside for guarantee)

In the spring of 1987 THE JUSTIFIED ANCIENTS OF MU MU (THE JAMS) released their debut L.P.. Side two featured great wadges of raw prime T.V. crudely sampled and pasted together. The climax of this was a TOP OF THE POPS, top ten run down. On reaching the number one spot the D.J.s voice was oblitarated by someone screaming… “F*** THAT WE WANT THE JAMS”

One year to the day THE TIMELORDS (THE JAMS in one of their many alias) were in actual fact number one and performing on TOP OF THE POPS. The record “DOCTORIN’ THE TARDIS” was pop music in its purist form.

THE JAMS have been accused of dabbling in dangerous forces of which they have precious little understanding.

Originally released in 1988, The Manual got timely reissued in 1989 to coincide with the release of Shag Times. Naturally, both were jointly advertised in full-page ads.

The decidedly serious joke is continued in the first JAMS book, The Manual (How To Have A Number One The Easy Way), which is a sometimes witty, often surprisingly solemn, guide to success in the era of Stock, Aitken and Waterman.
Robin Denselow, The Guardian, 6 Jan 1989

The Manual is an interesting and witty journey through the Timelords’ (or JAMs) own experience, but don’t forget ‘Doctorin’ the House’ [sic] wasn’t the first single they ever released and we’re still waiting for the follow up aren’t we? Don’t take out a second mortage or rob your mum’s purse to finance your trip through The Manual, is our advice.
Unknown, Record Mirror, 14 Jan 1989

As information, mostly reliable; as a read, wise and funny; as a challenge to the burning ambition to try for the Big Time, bold and cheap. If the price of failure is the cost of one book, how valuable is the prize, anyway? Ask yourselves.
Unknown, The Catalogue, Jan 1989

While some of its contents and references are slightly outdated now, The Manual remains an essential read on KLF history, be it for a glimpse behind the scenes of the creation of Doctorin’ The Tardis or simply for your own amusement. Should you decide to follow its rules and attempt to write your very own Number One hit single do not hestitate to let us know.

The Manual (How To Have A Number One The Easy Way)