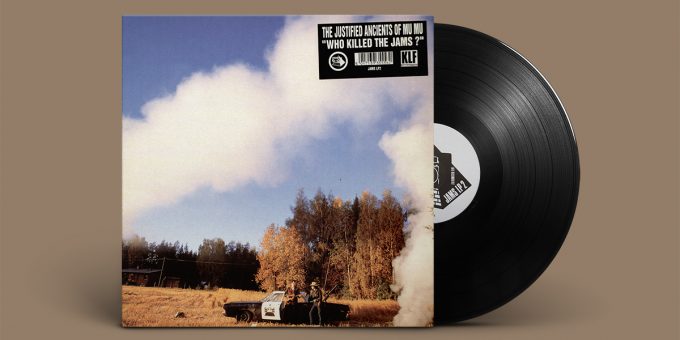 While critics might label Who Killed The JAMS? as ‘more of the same’ the follow-up album to 1987 saw The Justified Ancients Of Mu Mu refine their style, with the closing track Burn The Bastards hinting at the musical path the duo would travel down in the not too distant future.

Some copies of Who Killed The JAMS? included “The 1987 Completeist List” (KLF001), a pictoral discography of past releases which also featured small-size replicas of the letters The JAMs had received from the MCPS and the enigmatic Don Lucknowe. It is interesting to note that the Completeist List claims the album to include twelve tracks in total rather than just seven.

The LP does not come with a proper tracklist. Instead the track titles were announced by Drummond and Cauty in Info Sheet #1.

The reason there was no track listing with the record was that to enable us to get the record out as fast as possible after we had finished recording it, we had to deliver the art work to the printers before Christmas at which time we didn’t know what the tracks were to be called.King Boy D (Info Sheet #1, Mar 1988)

A bootleg taken from the Master Room tapes gives away some of the work-in-progress titles for a couple of tracks, most notably Disaster Fund Collection (which was originally titled The Cage), Prestwich Prophet’s Grin (was Clean Up Men, a reference to Betty Wright’s Clean Up Woman of which the JAMs’ track samples the opening) and Burn The Bastards (was JAM’s Have A Party). A couple of these also do appear in an article in the 6th Feb issue of Sounds which further confirms the original tracklist.

Furthermore the press release for Disco 2000’s One Love Nation suggests that Candystore (of which One Love Nation is a re-write) was originally called I Hate This House.

[…] Wagner, Jimi Hendrix, Sly Stone, Sixties girl groups, Scottish mythology and an accent not dissimilar to the undertaker’s in ‘Dad’s Army’ are cut up on the slab and ‘sampled’ through a series of B movie rock ‘n’ roll gestures, with a gleeful disrespect for rap etiquette.

At best, this is funny, at worst… well, I’m sure the perpetrators find it amusing. But then I’d wager that fun […] is the main motive behind this disc.

Who Killed The Jams is a high-speed collage of familiar riffs and fragments of 30 years of pop history, bolted together around pulsating electronic riffs and with Drummond’s raving-laird Highlandisms souped up by a bawling female chorus. […] Cynical as this operation is, it merely takes current industry practice to its logical limit. Inane nitpicking over the point at which “sampling” becomescopying or whether redeployment of someone else’s riff is creative recycling or mere cheating is going to stop sooner or later, because digital technology is here. […] Meanwhile, the album is damn good fun.
Adam Sweeting, The Guardian, 5 Feb 1988

If ‘1987’ was a rough hewn composite of cheek, spite and pertinent comment, then ‘LP2’ is simultaneously a diamond-sharp rejoinder and an eloquent parting word. Samples? It’s got them but ‘LP2’ mines a more traditional form of sonic larcency, the time-honoured craft of plagiarism.
Roy Wilkinson, The Guardian, 5 Feb 1988

The Justified Ancients Of Mu Mu seem to suffer more from boredom than from law-suits and so the fun they have here lies in passing off their own versions of classic sounds as samples and vice versa. […] On their second (short) LP, JAM are no longer critics, undermining well-loved tracks, but fans, the familiar phrases emerging from their relentless rap as if from dim memories of the perfect party.
Simon Frith, The Observer, 7 Feb 1988

A certain feeling of anti-climax unfortunately infects this record, you feel you’ve had a good time but find it hard to remember when. It all seems slightly hollow and hazy when the lights go up. The endless party abruptly burns itself out and for the listener there’s nowhere else to go.
Edwin Pouncey, NME, 13 Feb 1988

The tones of Bill Drummond fill the air like a drunken Scotsman intent on waving a clenched Celtic fist for the right to party […] but the songs have lost their poignant bite for the most part, reeling themselves in as a final, rather disappointing chapter to an encouragingly anarchistic story. JAMS deserved to go out with a better blaze than this, but I suppose it’ll suffice, all the same.
Nick Brody, Underground, Mar 1988

1 thought on “Who Killed The JAMS?”