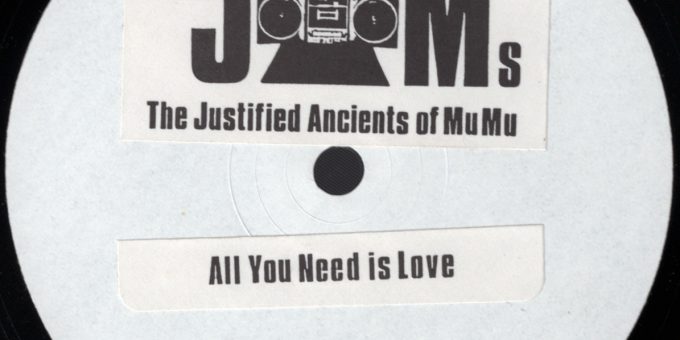 All You Need Is Love is The JAMs’ debut single released in early March 1987 and marks the starting point of the creative partnership between Jimmy Cauty and Bill Drummond.

Around 1985 I got to hate the whole history of rock ‘n’ roll: The Doors, Velvet Underground, the Stones, The Beatles, Tamla, Otis Redding – all the stuff that’s handed down as being what good music’s all about. A lot of it I liked and I’ll probably always like it, but I was sick of the idea of dragging around 30 years of rock ‘n’ rock history. You just wanna go ‘Aw f*** off!’. The only thing that excited me was hip hop. I was going through a period of wanting to be a writer, but I really wanted to make a hip hop record […]Bill Drummond (Record Mirror, 12 Jan 1991)
I had this idea as I was walking around with this pretty crap hip hop tune ‘MC Story‘ in my head, and I just started rapping this thing that became ‘All You Need Is Love’. All the samples on the single came into my head that first day. They don’t fit beatwise but I knew I had to find out how to put it together.King Boy D (Sounds, 16 May 1987)

All he lacked now was a partner in crime, though Bill just knew the right person.

With Jimmy still being under contract to WEA as a member of Brilliant, the duo decided to remain incognito and invented the pseudonyms of King Boy D and Rockman Rock, with the band’s extended lineup also including rapper Chike and Lovers rock duo Burning Illusion1Sounds Mar 1987, and denied having been in any bands before The JAMs.

F*** this new rock revivalism, this is the sort of record that 18-year-olds should be making. Forget all these drongos discovering Led Zeppelin and the equally misguided Edwyn Collins and Buzzcocks clones, The JAMMs are coming to town, stealing everything in sight, and giving back more – this means real change.King Boy D (Sounds, 1987)

British music papers were quick to see through their disguise, though.

We decided that the record would be received more readily if the rock papers thought it came from three 18-year-olds somewhere rather than us. That all fell through straight away and people knew who’d made it.Bill Drummond (Sounds, 24 Nov 1990)

Released as a while label run of 500 copies only, the original version slightly differs from the later releases on 1987 and Shag Times as it uses the original MC5/Beatles samples during the intro which in turn obviously made it difficult to release the single properly.

We’re having real problems getting this record distributed. The Cartel won’t touch it. Everyone’s afraid because of the copyright thing, frightened EMI will prosecute over the Beatles snatch. I’m told that, legally, it’s the same as bootlegging.Bill Drummond

The threat of injunctions from a trio of majors has resulted in a swift halt to the distribution or repressing of [The JAMs’] critically salivated-over excercise in aural theft, ‘All You Need Is Love’.

So far around a half of the initial pressing of 1,000 singles has been mailed out to well-known subversives on the press, radio and club scene, with stray copies exchanging hands for up to £30 in under-the-counter deals. That makes official calls for any existing copies to be destroyed something of an expensive proposition.NME, 11 Apr 1987

Cauty and Drummond would subsequently remove the samples in question to release the cleaner but still not entirely sample-free All You Need Is Love (106bpm) shortly thereafter.

“All You Need Is Love” is the kind of flailing, unstable hip hop mess that The Beastie Boys used to specialize in pre-Def Jam, mashing MC5’s “Kick Out The Jams” up against Sam Fox’s “Touch Me”, and throwing in the synth squeal from The Osmonds’ “Crazy Horses” for good measure. Great stuff. Hysterical, in both senses of the word.
Unknown, 1987