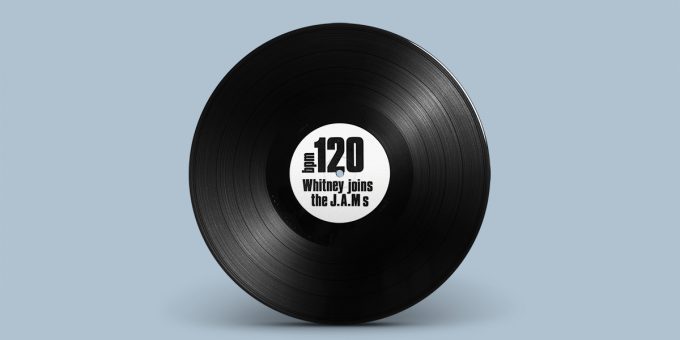 Whitney Joins The J.A.Ms was the first JAMs single since the release of 1987. On it The JAMs mashed the funky guitar from Isaac Hayes’ “Theme From Shaft” with the refrain from “I Wanna Dance With Somebody” by Whitney Houston, interspersed by King Boy D begging her to “join the JAMs”.

Despite the heavy sampling throughout the whole track Whitey Joins The J.A.Ms did not meet the same fate as the previous JAMs single and album.

Though being a single track release only, an alternate version later appeared on the second LP of Shag Times.

Whereas the band’s material so far has been an aural montage of hip-hop beats, metal guitar and excessive Top 40 sampling, ‘Whitney Joins The Jams’ has nothing but pure dance appeal.
NME, 8 Aug 1987

A disco gun down that is so beat packed it will keep your boogie box high and gasping for days. If this doesn’t prove to you that dance music is moving with more energy and vitality than traditional rock then nothing will.
NME, 22 Aug 1987

On the original pressings the B-side is left blank. Reissues of the single were distributed at a later point, featuring a tone groove on the B-side. More details can be found in the FAQ section.