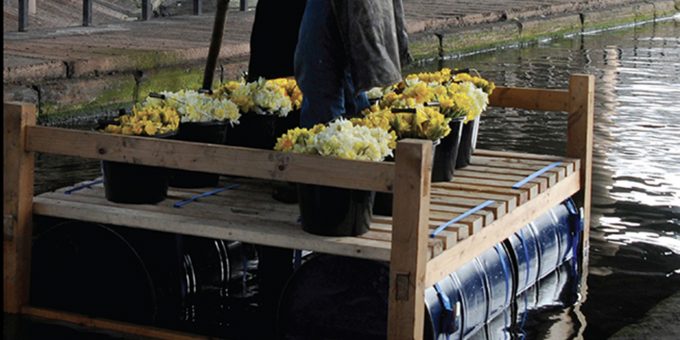 Score 378 is a French book published in 2015 which is divided into two major parts.

During the first 100 pages the book follows Bill Drummond and his performance 7 Decades, 7 Days, 7 Albums which took place in February 2011: having agreed to be the editor of the Offline People blog for a week, both Drummond and the resident Offline People editors were listening to one album every day each, one album for every decade since the ’50s, and published their thoughts on their website.

The rest of the book is a biography, covering important cornerstones of Drummond’s career from his days with Zoo Records to the founding of The17. The whole package is completed by a number of interviews with past companions Jimmy Cauty and David Balfe, and Mika Vainio of Finnish electronic music outlet Pan Sonic (who had comissioned a remix of 2K’s Fuck The Millennium in 1997).

Bill Drummond is one of the major artists of pop music and contemporary art. With his group KLF he applied the situationist theories to acid house and made the biggest sale of singles in the world in 1991, before leaving the music business a year later in full ceremony at the BRIT Awards after a grindcore cover of “3AM Eternal”.

If we want to understand what led Bill Drummond from his birth in South Africa in 1953 to the creation of his experimental choir The17 in 2008, we will have to talk about the Zoo Records label and Echo & The Bunnymen, describe Trancentral (the squat, the recording studio, the KLF utopia), talk innovation in sampling and mashup, listen to the album Chill Out which coined ambient house, watch the movie and listen to the album ‘The White Room’, imagine the destroyed ‘The Black Room’ album, detail his attempts to subvert the world of contemporary art and the cremation of a million pounds sterling in 1994, look at his awareness of the archaism of recorded music of the twentieth century, in order to evoke his life, his personal mythology and the pleasure we had to collaborate with him during the performance 7 Decades, 7 Days, 7 Albums in 2011.

First book in French with and about Bill Drummond,  mixing music, art, architecture and film as dreamlike mixtapes. These exchanges and this portrait including 32 illustrations, while interviews with Jimmy Cauty (KLF, The Orb), David Balfe (producer of Blur and General Manager of Sony Music) and Mika Vainio (Pan Sonic, Ø, Sähkö Recordings) make us discover an artist too little known in France.

The Offline People are, among others, Julien Demeuzois and Achylles Brown, two brothers who regularly publish on the blog theofflinepeople.com.

Is It Worth It?

While the number of books and publications by and about Bill Drummond is ever growing there is a painful lack of proper books in languages other than English, and this book fills the gap nicely.

Cover of “Score 378” by The Offline People