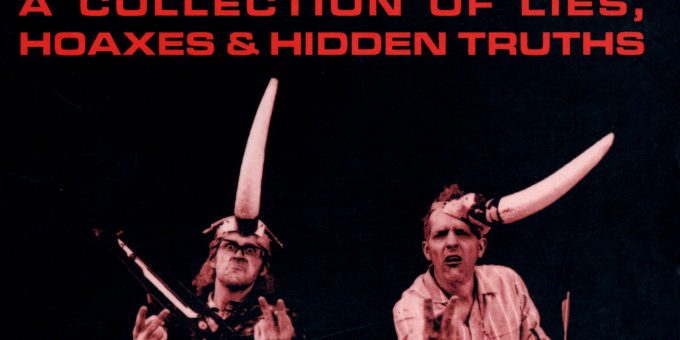 Confusion Incorporated is a compilation of stories and journalistic output of English writer Stewart Home, though the term “journalistic” should probably be taken with a grain of salt in this context. During his career he produced various parody pieces whose truthfulness is questionable at best (and non-existant at worst), sometimes to hilarious effect.

The book includes two chapters related to The KLF. In ‘Bill And Jimmy Mutilate A Cow’ the author describes a fictional and rather outlandish post-2K gig aftershow event complete with hookers, ley lines, and a dead cow tied to a crucifix which later gets butchered by Bill and Jimmy on stage, splattering present record company executives with its blood. First published in D>Tour in October 1997 the story’s climax clearly borrows from the KLF’s infamous BRIT Awards performance and shares some of its motives with Bill Drummond’s short story Let’s Grind.

Most importantly though Confusion Incorporated also includes the story ‘Captive Of The KLF’ which infamously triggered police forces from Devon and Cornwall to arrest Jimmy and search his house after Home claimed to having been presented an arsenal of illegal weaponry at Cauty’s home. The events are also briefly mentioned in Jimmy’s Advanced Acoustic Armaments Cookbook.

Devon and Cornwall police arrested KLF star Jimmy Cauty on an arms warrant after reading a hoax report in which Stewart Home claimed the pop musician had shown him an arsenal of weapons!

Journalist Charlotte O’Sullivan read about Glop Art in an article by Stewart Home and produced a feature on the movement for The Observer without ever realising that the piece she’d ripped off was a hoax!

There are just two of the many amazing responses to the hilarious journalistic deceptions of arch wind-up merchant Stewart Home. The imaginative, the complicated, the subtle, the funny – the very, very funny – comprise the subject matter of this compendium of articles and lectures. Regardless of whether he is being crude, rude or devious, Home hits his targets with deadly accuracy and side-splitting effect. Drawing on sources as diverse as the philosophy of Hegel and the comedy of Lenny Bruce, the music of Karlheinz Stochkausen and the statuesque celebrity of Pamela Anderson Lee, Home uses humour to illuminate contemporary culture.