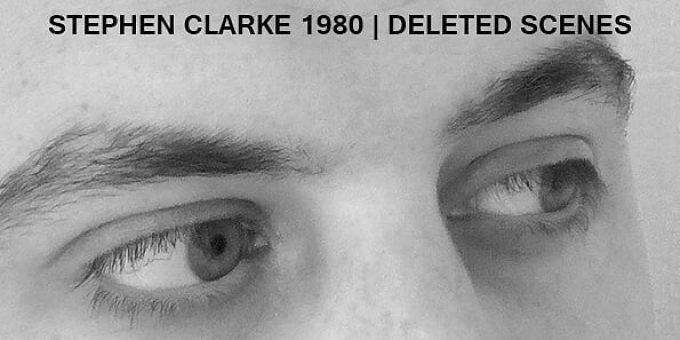 Deleted Scenes is the autobiography of Northern Irish writer and musician Stephen Michael Clarke which includes – amongst various mentions of Bill Drummond throughout the book – a full chapter called Liberation Loophole, dedicated to The JAMS’ return to Liverpool in 2017, though with a slight twist.

With so many people across the globe watching events at ‘Welcome To The Dark Ages’ from afar, we wanted to get a perspective on how proceedings looked from outside of the ‘volunteers’. Many of the 400 have been intrigued to see how the world has reacted to the ‘situation’ created by The JAMs. Stephen shows us how it all came across via the web and social media…Welcome To The Dark Ages

This is my first book.

It’s about my first kiss – which made me smile and made a girl vomit.

It’s about being a teenage runaway.

It’s about settling down.

It’s about living through The Troubles in Belfast, Northern Ireland.

It’s about making a scene in Edinburgh.

It’s about standing in the spotlight and raising my hands as a crowd roared.

It’s also about hiding behind curtains.

It’s about living on a country estate in Scotland and eating Dougie MacLean’s honey.

It’s also about getting divorced.

It’s about chronic pain and throwing up blood all night.

It’s about 37 years worth of memories.

It’s also about my favourite band, The KLF, and how my life has intertwined with Bill Drummond’s on several occasions.

Is it worth it?

Definitely – Stephen’s recount of the events between August 23rd and 26th from the perspective of an outsider is an entertaining event log for the rest of us. The first few pages give a short background of Clarke’s personal history with The KLF, including a Score (Dream) he contributed to The17 back in 2008. The mid-section bursts with the enthusiasm of a person describing the full three days to a friend down the pub after a pint or two with their hands gesturing fervently and facts slowly evolving into exaggeration – something Stephen is of course fully aware of. The last third ends on his afterthoughts considering the WTTDA event and its 400 participants.

If you – like many of us – have spend those three days sitting in front of your PC, refreshing Twitter and Facebook every other minute not to miss even the slightest detail of what was going on in Liverpool, then you will certainly recognize yourself in Liberation Loophole, while those of you who were part of the 400 will surely get a chuckle out of it as well.

Disclaimer: Stephen Clarke 1980 provided us with a free eBook copy for review purposes. Despite that we still insisted on buying a proper softcover edition.