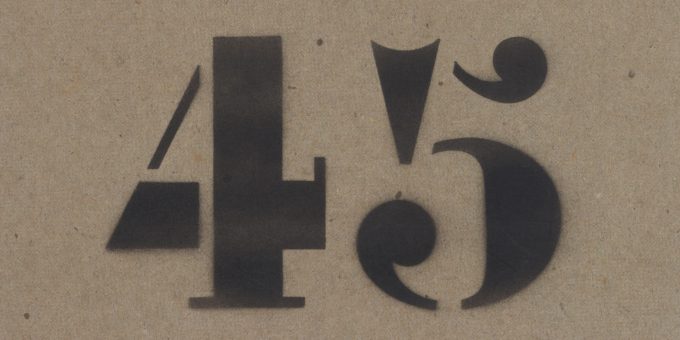 45 compiles some of Bill’s short stories previously released in From The Shores Of Lake Placid and adds a wide range of new ones as well.

Although being an episodic autobiography of Bill first and foremost, he also talks about some of their KLF/JAMs exploits, most notably the recording of their 1991 single Justified And Ancient (in ‘They Called Me Up In Tennessee’), their contribution to the HELP album as the One World Orchestra (in ‘Robbie Joins The Jams’), and the brief history of 2K’s Fuck The Millennium (‘Trashed’, ‘Wheelchairs’ and ‘Now That’s What I Call Disillusionment, 2’).

The first edition of 45 contains the following stories:

A second edition of 45 got released in 2001 featuring three additional closing chapters:

In 1986 I recorded a long-playing record entitled ‘The Man’. It was released by Creation Records. It was a very personal record. All the songs dealt with my life and my emotions at that point in time. I was 33⅓ years old. Time for a revolution, I thought. I was leaving pop music behind to start writing books. I promised myself I would not have any further involvement with music until I reached the age of 45, when I would make one single 45 rpm seven-inch record.

My promise was never kept. Like that dog, I returned. As I entered my 45th year, I decided to write a book that contained snapshots of the world from where I was standing. The stories span a period from early in my 45th year to well into being 45. I will read them again if I get to the age of 78.

If this books gets written, this page may act as an introduction.

Bill Drummond is a cultural magician, and ’45’ is his logbook. Shelve alongside Brian Eno’s ‘A Year With Swollen Appendices’. Hail Discordia!
Charles Shaar Murray, Independent, 26 Feb 2000

At its best is has flashes of twisted brilliance reminiscent of Iain Sinclair or Will Self, but the majority is most interesting because the author was one half of the KLF. Of course, that is more than enough glory for one lifetime. Yet the fact remains that this book will forever labour under the shadow of those horned men and their gleefully apocalyptic music.
Steven Poole, The Guardian, 26 Feb 2000

Drummond’s narration of [his] doomed enterprises follows a similarly wayward path, digressing at every opportunity to tell more fantastic tales. But there is a method in his madness. The book’s disparate follies all swoop around the same themes – music, myth-making, celebrity, art, the media. And you realise that, far from being foolish, Drummond has the inimitable wisdom of a true maverick.
Jerome Boyd Maunsell, The Times, 26 Feb 2000

These essays, written by the former KLF star during his 45th year, come from a pencil that never rests and a mind still carrying the desires of a raging art student. Don’t expect the usual rock’n’roll out-to-lunch scenarios with drugs and groupies in this book: Drummond’s insterest lies in revealing the obscure and ambiguous meaning of it all.
Jenny Fabian, Mojo, Feb 2000

You get arch, vivid portrailts of Drummond’s many wide-eyed schemes, but he fights shy of the personal details and motivations that lie behind his 25-year career. […] 45 may lack the read-it-again-now brilliance of former Drummond client Julian Cope’s memoirs, but it’s still a compelling missive from one of popular culture’s great discordant imaginations.
Ian Harrison, Select, Apr 2000

[Drummond] can write the arse off most journalists, let alone other rock stars, and gives no concession to linear storytelling. Instead, 45 is a frenzied gonzo series of recollections written late at night in his Aylesbury kitchen fuelled only by a flood of tea. […] Witty, hilarious and tear-jerking.
Andy Fyfe, Q Magazine, May 2000

Even if you are just interested in the KLF related chapters this book is well worth a read for these alone. The whole book is pretty entertaining, though, so we can only recommend this as an essential read.