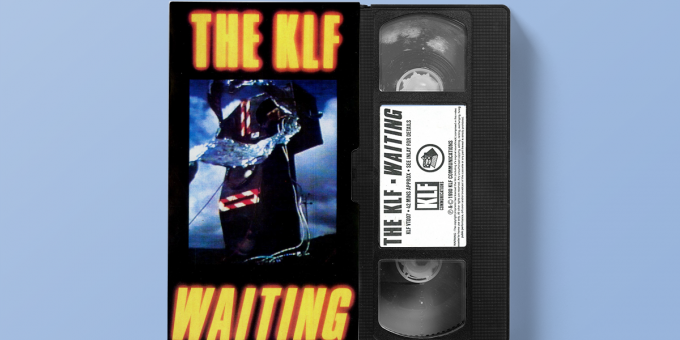 Waiting is a 42 minute ambient video of Bill and Jimmy wandering across the Isle of Jura, doing nothing in particular. Its soundtrack can be described as a slightly darker version of Chill Out.

Waiting was just us being normal. That’s the sort of thing that we do normally. People are missing the point if the say it’s boring, because waiting is boring.Jimmy Cauty (NME, 12 Jan 1991)

In 1997 the soundtrack was released as one half of Echo Beach’s Waiting For The Rights Of Mu.

It’s disconcerting in its uneventfulness, with its drifting segue of samples ancient and modern billowing out of the speakers into the island wilderness, ulitmately amounting to nothing in the face of the mighty indifference of Nature. The KLF boys look on, very solemn, very humble, cross-legged around a bonfire. Contrast this with every other rock video, in which worthless rock figures stride majestically across cliched natural backdrops emoting pompously like masters of all they survey and maybe you’ll get the idea. A very solemn joke, methinks.
David Stubbs, Melody Maker, 1 Dec 1990

Certainly, there are a few striking images. Butt’s use of high-speed panning, colour and tonal irregularities and his eye for the island’s remote beauty all drag points back, but eventually you’re unlike to miss anything important should you decide to take five and do the washing-up halfway through.
Tim Peacock, Sounds, 24 Nov 1990

‘Waiting’ works as a visual accompaniment to The KLF’s ‘Chill Out’ moods, bringing the wild guitar of Jimi Hendrix to the tranquil surroundings of the isle of Jura […] It’s very relaxing and the perfect antidote to ‘Total Recall’.
Unknown, 5 Nov 1990