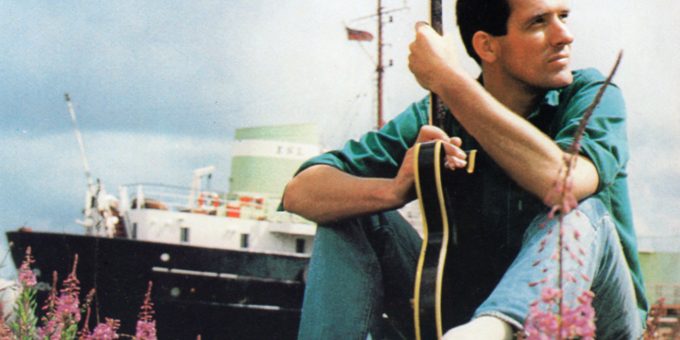 The Man was Bill Drummond’s 1986 solo album on Creation Records, meant as a farewell to his previous musical past at the age of 33.

When I was involved in management and all that stuff, it was great for a time, but it started to bother me. I never really wanted to be a manager in the first place. It’s something I just sort of fell into. It was taking over my life, so I had to get out of it.Bill Drummond (Option, Nov 1989)

With his interest slowly fading and after having spent half a million pounds at WEA trying to get Brilliant into the charts without any success, Bill finally decided to leave the music business behind.

At that point I thought ‘What am I doing this for?’ and I got out. I did an album myself, wrote the songs in five days, recorded it in five days, and put it out on Creation Records.Bill Drummond (Saturday Sequence, Dec 1990)
I wanted to make the album because I realised that I’ve spent a lot of time persuading other people to do what I thought they ought to be doing and now I want to persuade myself to do what I ought to be doing.Bill Drummond (Melody Maker, 1 Nov 1986)

Despite an impressive list of musicians he had worked with until then, Bill chose instead to work with Anglo-American alternative pop rock band Voice Of The Beehive, and Australian indie-rock band The Triffids whose pedal steel player Graham Lee would appear on The KLF’s Chill Out a couple of years later.

I made a list of emotions I wanted to cover, then a list of titles somehow and I wrote them in a week without thinking at all about what I was doing. I just wanted to get some things out of my head.Bill Drummond (Beat, Nov 1986)

The Man is probably best known for the song Julian Cope Is Dead, a tongue-in-cheek fictional story of how Drummond shoots The Teardrop Explodes’ front singer Julian Cope to fuel his stagnating career (Drummond being the Teardrops’ former manager) and make him ‘bigger than the Beatles, for sure.’

The album closes on Such A Parcel Of Rogues In A Nation, a diatribe against England’s historical treatment of Scotland originally written by Robert Burns in 1791, recited by Bill’s father, Rev Jack Drummond.

This isn’t a retirement, merely the end of a phase and the start of another.Bill Drummond (Melody Maker, 1 Nov 1986)

Initially an LP release only the label also put out a timely CD re-release of The Man in 1990. This was probably to cash in on Drummond’s success with The KLF.

The King Of Joy & The Manager

Following the album’s release Creation Records released The King Of Joy, the last track Bill had recorded for the album, as a 12″ single the following year.

I did that one after I’d done the rest. I’d recorded them and I’d got one more day and I thought ‘Ooh, I haven’t done joy!’ I haven’t done an up thing, it’s all looking back and all that. I was feeling so good that I’d actually got things done, I’d been doing the vocals that day and I thought this is Bill Drummond, actually making an LP, I don’t believe it!! So I was sitting at home singing away. I’d always wanted to use those chords, the most corny chords going I’m not a song writer, I haven’t written songs for 9 years, but when I did I never dared use those chords. Now, at this more mature age I’m willing to take these risks…Bill Drummond (Beat, Nov 1986)

Included on the B-side was The Manager, the soundtrack of a video shot by Bill Butt which was a rant about the state of the music industry. In it he demands musicians not to spend any more than then days recording their LPs, and the abolishment of advances as ‘no really great music has ever come from a band that’s got themselves a big advance.’

Furthermore Bill suggests to become ‘the manager of the complete music thing’, inviting everybody to write him for his advice and personal guidance for a mere one hundred pounds enclosed as a cheque.

Before the record had even been released, I’d received a couple of cheques. I can’t say who they’re from but I’ve got £200, so the video’s more or less paid for.Bill Drummond (Sounds, 1987)

However, Bill did not follow through with his offer, in turn following advice from his own manager.

As soon as I’d finished ‘The Manager’, my manager said, Don’t do it – don’t try and attempt what I was setting myself up as on the record. He said I should stop telling other people what they should do and just do what I want.Bill Drummond (Sounds, 1987)

[…] a curious and hugely enjoyable set that trips from Tennessee twang to fake Scottish folk music to brash little pop tunes. […] We could stand a lot more of this sort of thing. (****)
Paul Du Noyer (Q, Nov 1986)

Bill Drummond, at the ripe old age of 33, has recorded this bizarre collection of his own songs to mark his retirement from the backroom of the music business and the commencement of a new chapter in his life. […] Thoroughly enchanting, ripe with Celtic sentimentality and telling personal revelations this is surely one of the oddest records of the year, yet it finds a place very close to my heart.
Helen Fitzgerald (Melody Maker, 1986)

This is a timely re-release considering KLF’s “What Time Is Love” is scorching the charts. […] “The Man” is ostensibly a Scottish folk LP, with hired hands playing an assortment of weird ethnic instruments. “Queen Of The South” is a mellow, breezy song that’s free from Bill’s awful vocals. Whenever he does talk to the mike, it sounds like a drunken talent night in Aviemore. However, “Julian Cope Is Dead” is so funny it can induce involuntary urination. […] Whether it’s samplers or steel guitars, he adds an anarchic touch to anything he lays his hands on. Love him or hate him, Bill Drummond is here to stay.
Zane (1990)