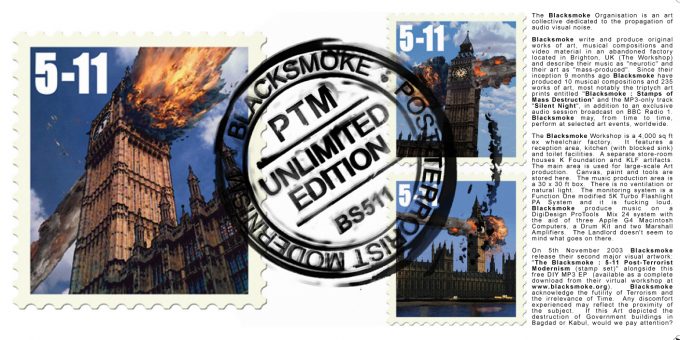 The Post-Terrorist Modernism EP was a free 4-track EP released by Jimmy Cauty and James Fogarty as The Blacksmoke Organization in November 2003.

During 2003 the self-titled “occasional art collective and musical group” had already shared various tracks for download through their website. The EP was first teased when Blacksmoke released Silent Night, another free track released on 11 Sep 2003 as a response to the second anniversary of 9-11.

We have just done an EP called ‘Fuck the Fucking Fuckers’. It is a concept EP, the concept being fuck America basically and fuck weapons of mass destruction. It is like a protest record. It is the kind of record that you would want to put on if you are going to go out on a riot. We do feel quite angry about what has been going on with the war.Jimmy Cauty (Undercover.com.au, 11 Sep 2003)

The EP included previously released tracks USA USA and Fuck The Fucking Fuckers (a remix of Gimpo Gimpo as performed at the M25 London Orbital event) along new track Blacksmoke Rising of which early bits and pieces had been hidden throughout the official Blacksmoke website. Also featured on the release is an alternate version of Silent Night which had been cut from the aforementioned BBC session, probably to not upset listeners.

The download for Post-Terrorist Modernism also included printable covers and CD labels, allowing listeners to create their own physical version. The cover art of an exploding Big Ben was also released separately, causing a stir in a couple of British newspapers.

The EP can still be downloaded from Archive.org for free. A limited edition of 50 cassette tapes got re-released in April 2021, including a remix of Emperor’s ‘I Am The Black Wizards’.