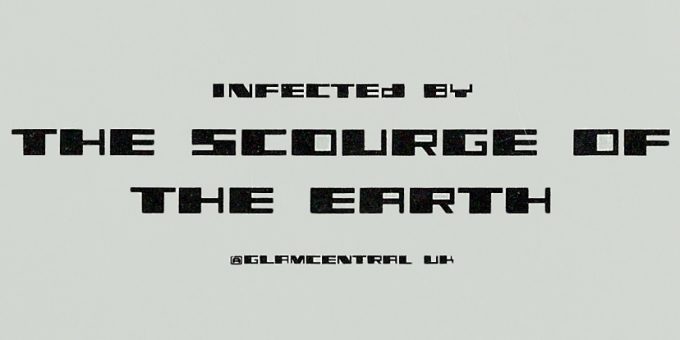 Between 1998 and 2003 Jimmy Cauty comissioned a wide array of remixes, most under his Scourge Of The Earth alias, at his Glamcentral studio.

Coinciding with the release of Hawkwind’s best of album “Epocheclipse” three remixes of their song “Silver Machine” were provided by Jimmy under his Scourge Of The Earth alias. All three versions are available on different CD and vinyl releases.

Did you know that HAWKWIND has been infected by the scourge of the earth?

Here at -_CLUB HARD_- I have great pleasure in offering you an exclusive preview of the yet unreleased Jimmy Cauty (from KLF fame/notoriety) re mix of Silver Machine by Hawkwind.

Each progressive and revolutionary for their time and this re mix meets two influential genres warming us up for a new one in Y2K… and all that bullshit!Club Hard Promo Sheet

To celebrate the eclipse the seminal “Silver Machine” has been infected @ Glamcentral by the Scourge Of The Earth (AKA Jimmy Cauty of the KLF). The 12″ Mix is the true sound of the epoch-eclipse. The mix is extremely heavy in content with screaming warped sirens and heavy guitar fuelled breaks. The mix drops and builds throughout using limited snippets of the original vocal to add emphasis on the harsh driving groove. This is perfect for a show stopper or end of night classic – so give it a try!Whitenoise Promo Sheet

While the Short Mix was commercially available the Long Mix only appeared on promo CDRs.

Originally scheduled for release in 1996, this remix only appeared on the 2001 reissue of BSL’s album “Yemen Cutta Connection” released on Echo Beach (who had also released the Waiting For The Rites Of Mu bootleg before).

Originally commissioned in 2001, this remix wasn’t officially available until the 2021 release of the “Beautiful Garbage” 20th Anniversary Edition.

Never officially released, though excerpts of it appeared in a DJ set by Alex Paterson.