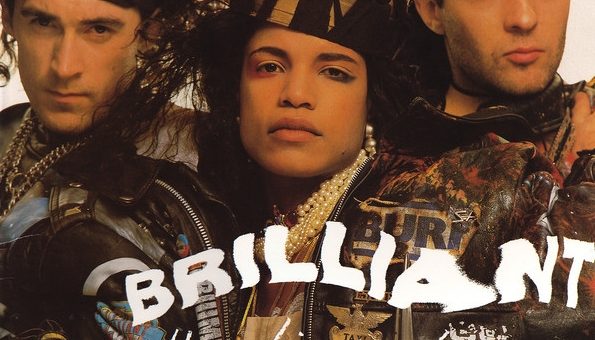 Brilliant started life in 1982 as a reaction of bass player Martin “Youth” Glover’s growing dissatisfaction with his current band Killing Joke and its band members. Following an angry musical one-person jab at his former band Glover went on to recruit a number of musicians and vocalists to found his new band Brilliant.

Their early singles Push and Colours were released through Limelight Music and Rough Trade respectively before the band was eventually signed to David Balfe’s newly-founded record label Food in mid 1984, with Brilliant’s Soul Murder becoming its first single. However, plans to release a full-length LP were scrapped as both this and its follow-up Wait For It failed to garner significant sales numbers.

Nevertheless Balfe was busy trying to get the band a distribution deal with Warner Records, eventually convincing his friend Bill Drummond (then A&R man at Warner Records) that Brilliant could become the next big thing. In turn Warner Records were more than willing to trust in Drummond’s instinct after his success with both Echo & The Bunnymen and The Teardrop Explodes.

Around the same time Jimmy Cauty joined the band as guitarist, raising the number of permanent band members even more. Now being an eight-piece band Brilliant slowly began to split at its seams, though.

That’s eight manifestos, eight different approaches to songwriting and performing. No wonder we were a shambles on stage. […] We tried to run it as a democracy, sharing the songwriting credits, and the whole thing just fell apart.Martin Glover (Blitz, Oct 1985)

Still they recorded Escape From New York, an LP featuring studio versions of former live tracks. However, even though the band seemed to be rather happy with the result, Warner rejected the album and demanded cutting down Brilliant to a three-piece consisting of Glover, Montana and Cauty only, and having the album re-recorded under the supervision of dance pop producers Stock, Aitken and Waterman.

As far as SAW were concerned they actually would have prefered to just keep June Montana, but Drummond was able to convince them otherwise. Both Glover and Cauty were still kept out of the recording and production process as much as possible at first but managed to convince the production trio over time to allow them to have some artistic input into B-sides and alternate mixes.

Kiss The Lips Of Life

Soon a couple of potential singles had been recorded, but despite heavy promotion by Warner through music videos, photo shoots and TV performances, both the debut single It’s A Man’s Man’s Man’s World (a cover version of James Brown’s soul classic) and its follow-up Love Is War failed to return the investment even though the music papers started to warm up to the band’s output.

[‘Love Is War’ is] a powerful dance record which reminded me of Princess’s last record and deserves to be a hit.
Unknown

By the time the third single Somebody (a radical rework of a song originally recorded for Escape From New York) launched in 1986 Warner had already ceased doing any more promo work as they had already spent a good £300,000 on a band that didn’t earn them enough money in return despite a lot of favourable press for both the band and their singles.

[‘Somebody’] is Brilliant’s most memorable offering to date, sounding like a very tough Bananarama tune but with more impressive vocal work from June. Not brilliant… but very good. (****)
Unknown

The album Kiss The Lips Of Life turned out to be yet another commercial flop, peaking at #83 in the UK.

The Demise Of Brilliant

After the release of fourth single The End Of The World (which was yet another cover version) and a legal battle with their label Brilliant decided to split later the same year, though the artistic paths of those involved would still cross during the following years – both Cauty and Glover went on to be temporary members of The Orb alongside Alex Paterson, while June Montana would become one half of the Cauty-produced Disco 2000 between 1987 and 1988.

Adverts for both the album and the singles appeared in various British music papers throughout 1986.

There are some fine slices of mayhem here, such as ‘Crash The Car’ and the title track, or a bizarre version of the old teen balld ‘The End Of The World’.

At times though, the focus is too formularised; too polished to stand out. Given the strength of personality in the band, we might have expected something more striking, and songwriting still seems to be their weakest facet.

They’re always trying something different, one minute calm and collected, the next furiously funky, keeping you on your toes all the time. (7 out of 10)
Helen Mead, Unknown, 1986

In 2009 Kiss The Lips Of Life got reissued on CD in the USA by Wounded Bird Records.