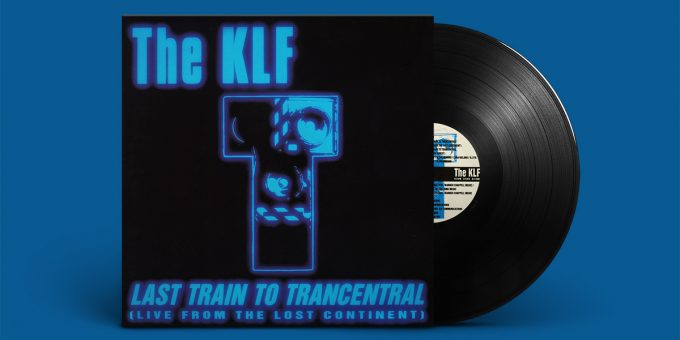 Following the chart success of 3 a.m. Eternal The KLF released Last Train To Trancentral (Live From The Lost Continent) in April 1991 which marked the third and final entry in the Stadium House Trilogy.

The track’s origins can be traced back all the way to Go To Sleep, though little of the original version remains in this version.

The single peaked at #2 in the UK charts and took the #1 spot in a couple of other European countries.

As usual Appearing distributed stickered copies of the 7″ single including a press release which shares some details about its origins and a possible preview screening of the Stadium House Trilogy at a still undisclosed cinema in London.

Adverts for the single appeared in the NME the weeks before and after the single’s release.

They drive other groups mad by boasting about how peasy-weasy it is to make a hit record. And, well, here’s another.
Smash Hits, May 1991

With their sheep guitars and curious cries of, “Mu Mu”, Drummond and Cauty had defiantly found a way of making the absurd sell.
NME, 21 Dec 1991 (#15 Year End Single Countdown)

Apart from the official mixes released on KLF Communications an exclusive Benio Over And Out version also appeared on the Deep Heat 10 compilation. Rumour has it that a second Benio Dub is also floating around somewhere as both are listed as 12″ single in Lazlo’s discography, but so far nobody could actually confirm its existence.