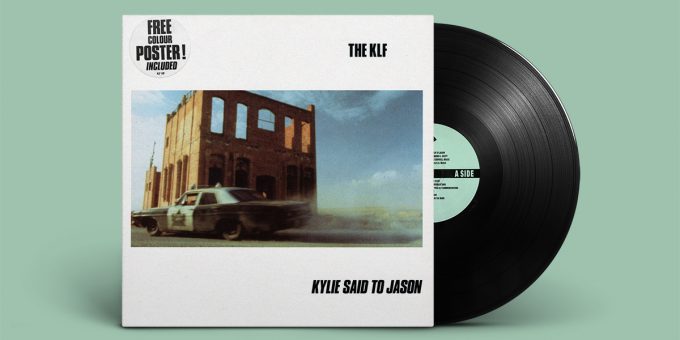 Kylie Said To Jason is the first (and only) single to be taken from the planned White Room Soundtrack album and was meant to bring in the additional money to help finish shooting the White Room movie which was already burning large holes into The KLF’s pockets at the time.

Its title refers to Kylie Minogue and Jason Donovan, then starring in the popular Australian soap opera Neighbours. Following the success of Doctorin’ The Tardis it was only logical to assume releasing yet another single built around the popularity of a successful media would see The KLF climb the top of the charts again, and with a recent Number One under their belts the duo was nothing short of self esteem.

I know this sounds cynical but I think we know what is going to make a top selling record. We can almost programme outselves to write hits and we alwys knew that ‘Doctorin The Tardis’ was going to be a number one, no doubt about it.Bill Drummond (Record Mirror, 12 Aug 1989)

Heavily drawing inspiration from the Pet Shop Boys’ Left To My Own Devices (itself a #4 hit single in late ’88) was also meant to solidify its chart performance.

We wore our Pet Shop Boys infatuations brazenly on our sleeves while we recorded this track and we are proud of it. As for Kylie & Jason, the lyrics are not some attempt at clever critique on our current soap idols.The KLF (Indie Top 20 Volume 8 sleevenotes)

However, the single’s obvious selling point proved to be its biggest stumbling block. Despite some favourable coverage in a couple of music papers BBC Radio 1 refused to play it, fearing it might put them into a bad light with fans of Kylie and Jason. Lacking any significant radio airplay Kylie Said To Jason failed to even enter the Top 100 which lead to The KLF subsequently cancelling the release of the full soundtrack. They still tried to see the positive side, though.

It seemed to fit at the time, but it was almost a relief when it flopped as we still had our club cred intact. I doubt we’ll be putting any more [pop records] out though.Bill Drummond, Jocks, March 1990

Adverts for Kylie Said To Jason were published in the NME at the end of July 1989.

Since it was considered a surefire top ten guarantee, The KLF naturally shot a video to go with it. Like many other videos after it, it was not officially available, but as usual promo tapes sent out by Appearing exist.

Both KLF 010T and 010P were manufactured using the same sleeve and labels (010T). The first 5,000 copies of the 12″ included a large poster (hence “P”) and a sticker with the alternate catalogue number.

While listed as KLF 010RR in some lists that particular cat# does not appear anywhere on this release. Rumour has it that some of these might have been sold as 2×12″ set together with KLF 010R and therefore might have been dubbed 010RR in the past.