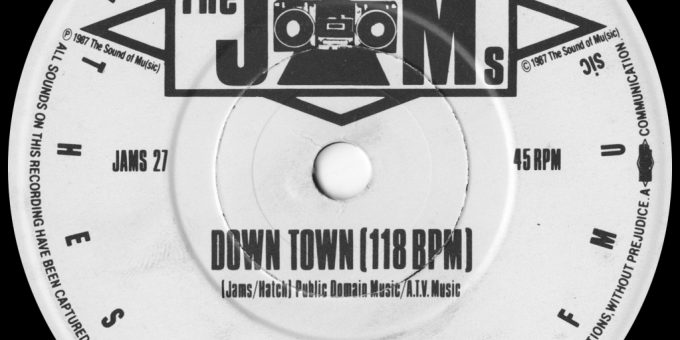 Gospel singers, Petula Clark samples, Scottish raps – Down Town has it all.

Originally planned to be completely sample-free (according to a short article in the NME) the final record included parts of Petula Clark’s iconic “Downtown”. Music magazines were eager to point out in their reviews that, unlike with previous JAMs singles, this time all the samples had been properly cleared – much to the surprise of a bemused Bill Drummond, though.

We were surprised to read in the papers that Pet Clarke [sic] had given her permission for us to sample her classic Downtown on our record of the same name. When we attempted to contact her, at her Swiss home, to do just this thing, we didn’t get further than her refusing to accept our transfer charge.King Boy D (Info Sheet, 22 Jan 1988

Despite being the next release right after JAMS 25 Down Town was accidently released as JAMS 27 rather than 26 due to an oversight by Drummond and Cauty.

When we put Downtown out and gave it the cat no. JAMS 27T it was a mistake. We forgot we hadn’t made a 26T. Then we decided to release Dance Mixes of tracks from the LP. This would be the missing JAMS 26T. We pressed up 2,000 then decided we didn’t like them, so we sold them into Europe. One of the tracks we remixed and is coming out titled ‘Burn The Beat’ by The KLF with the cat no. KLF 002T. If you are confused so are we.King Boy D (Info Sheet #1, 10 Mar 1988)

The Jamms may not be the hippest, sanest, or sweetest band to stalk the Earth this year but they’re certainly the most imaginative. Sampling every artist from the MC5 to Abba to Sam Fox and now Petula Clark they’ve fired a musical trail so shocking they couldn’t have kept you more on your toes if they’d stuffed a handgrenade up your ass and sent you out to tap dance in a pair of stilettos!
NME, 28 Nov 1987 (Single Of The Week)