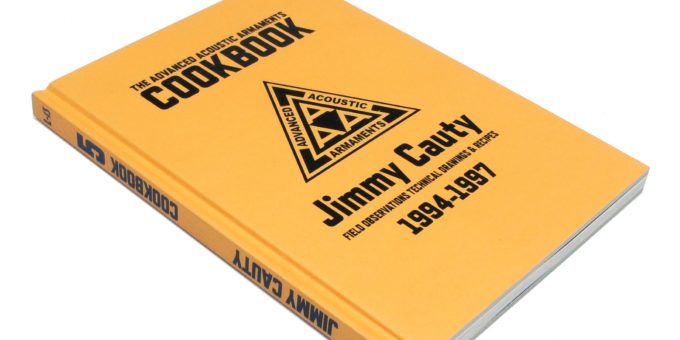 The Advanced Acoustic Armaments Cookbook traces the story of Jimmy Cauty’s mobile sonic weaponry between 1994 and 1997. On 64 pages it covers the various stages of the Triple A story, from the purchase and refurbishing of the Saracen APC to field tests and its utilisation as road block during the A30 Fairmile Road protests.

There is also a brief throwback to Stewart Home’s hoax story which lead to the arresting of Jimmy during said road protests and the eventual end of the Triple A.

The cookbook’s pages are filled with technical drawings, replicas of newspaper clippings, and photographs taken at various occasions. Between all those Jimmy has also snuck some frames from the unfinished Deep Shit graphic novel. To round things off the book wraps up with a cake recipe because why not?

The first in a series of five cookbooks from Jimmy Cauty. Field observations, technical drawings and recipes.L-13

L-13 shipped the first signed and numbered edition of 250 copies in a three-coloured cardboard dust jacket, including an Advanced Acoustic Armaments sticker and the “Cow Killers” poster. A regular edition was published in late April 2019.

According to the spine this is Volume 5 in the Cookbook series, with the others mentioned as “Building Trancentral”, “Stonehenge” and “Burn A Million Quid” (the fourth book remains unspecified), though whether or not these books will be available at some point remains to be seen.

“The Advanced Acoustic Armaments Cookbook” (Back)