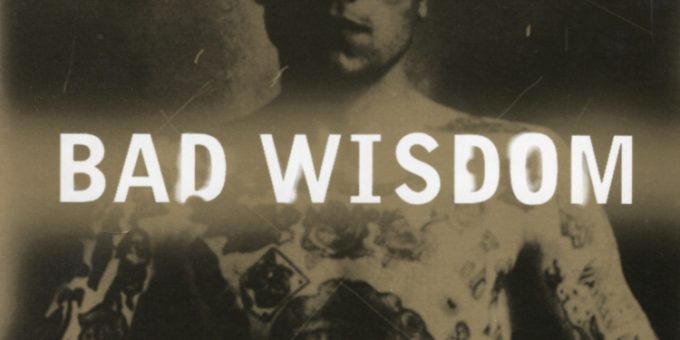 Bad Wisdom is the first book in the projected “Travel Books From Hell” trilogy by Bill Drummond and Mark Manning, retelling their journey to take a picture of Elvis Presley to the North Pole to achieve world peace. Realizing it’s not possible to reach their destination from continental Europe they manage to conclude their journey when meeting the keeper of the (titular) most northerly lighthouse in the world.

According to Bill the book evolved out of an ever growing number of letters Manning and him were sending each other ‘at a furious rate’.

It just seemed to be a good idea. There used to be books that took the form of letters, and I like the idea that you don’t know what the letter that’s going to come is going to shake in your head. What it’s going to jar out of you. It’s a continual thing – if you’re just writing yourself, you know which way your mind works, you know how you’re going to react, you’re always playing safe within the bounds of your own mind. If you’ve got this other mind banging intou you, and vice versa, things can happen.Bill Drummond (The Scotsman WeekEnd, 18 May 1996)

Like the Bible Of Dreams before it, Bad Wisdom was originally meant to be yet another Curfew Tower exclusive before British publishing house Pengiun Books picked it up.

Originally we wanted to have only one hand-written copy of the book and we would have made it available to people at the Curfew Tower. So, if people wanted to read it, they would have had to come there, but Mark Manning’s partner who edited our two stories together for Bad Wisdom, persuaded us that we should have made this book, which was a totally stupid and arrogant book, as available as possible. Penguin is as available as possible and, at the time, there was somebody at Penguin who really liked the book, so they signed it. Then, once it was signed to them, that person left the company and nobody else there was really interested in it, they just thought this was a book by a couple of ex-popstars and they didn’t think of it in any other way.Bill Drummond

Even though the book is not primarily about the KLF, Drummond does write in detail about some aspects of the band, such as how it all fell apart in 1992.

This is the story of a journey made by Drummond and Manning to the North Pole. Disorientated and disillusioned, they set out in the winter of 1992 to sacrifice an icon of Elvis Presley at the top of the world. Exhausted by the young man’s religion of rock and roll, they hope to lay to rest its pagan spirit and carry its blaze forward into eternity. The two accounts of the journey written independently of each other, clash and mesh as the authors try to make sense of their bizarre adventures.

A classic read which is guaranteed to be talked about long after The Love Reaction and the Justified Ancients Of Mu Mu have been forgotten.
Lisa Carson, Muzik, Dec 1996