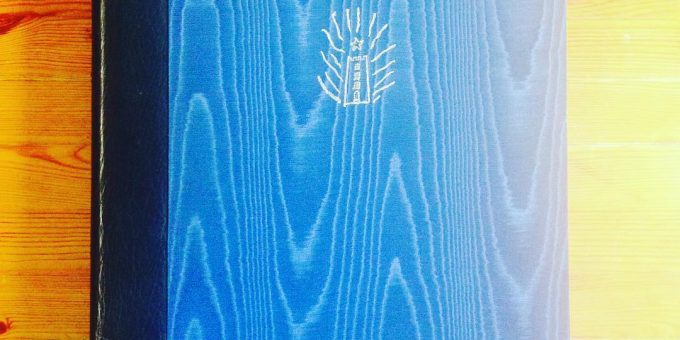 “A Bible Of Dreams” is a book of images by Mark Manning, largely photomontages, with text by Bill Drummond. It is described as “a visual poem composed by MS Manning”, with Drummond giving “a personal interpretation of the poem” in a commentary, along with a biographical background piece. The colour plates are reproductions of a picture collage pieced together by Manning in a scrapbook during a 1992 Scandinavian tour, and sent to Drummond shortly after tour ended. Drummond found himself repeatedly drawn to its contents, each perusal revealing more, “like a collection of good verse”. Manning was horrified when he suggested publishing it.

The book is published by The Curfew Press, the two men’s publishing company based in The Curfew Tower. It’s available only in a limited edition of 200 numbered copies, signed by Drummond and Manning, costing £500. It is bound in blue Nigerian goatskin, each page hand-printed and stitched into a calf-leather spine, and comes in a blue moire silk slipcase. It’s not so much an expensive book as an average work of art. They have sold a few to “universities and the like” If you want one and have a “large amount of money” to spare, contact the Curfew Press.

Zed’s art looks like it’s deliberately fallen. The collected trash of a rock’n’roll degenerate, the collages entangle images from heavy metal, pornography, Nazi Germany and Disney. Drummond’s text suggests they represent an archetypal rock’n’roll headspace: a place where sleaze, ambition, rebellion and religion meet. Zed reckons that just by sampling these images he’s raising them from the base to the divine. And there are points in his commentary where Bill finds a postitivity in porn. Maybe Zed and Drummond are examining cultural inequality, wondering why some kinds of art are raised over others. Which is no great surprise from two men who work in rock or pop, an area of culture that is often ignored by art critics.

Drummond and Manning undertook a series of interviews to promote the book, in i-D, Vox and GQ magazines. In one interview Manning said that the text of the book was available on the Internet, then laughed. List members have looked far and wide and have found no trace of it. It is most likely that this statement was a deliberate wind-up for us and people like us, and an Internet-hype backlash joke.