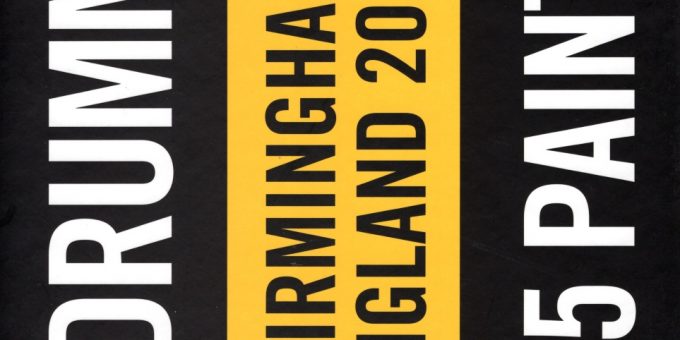 The 25 Paintings compiles a selection of past Penkiln Burn posters and photographs from the now-defunct PB website into a comprehensive archive of Bill Drummond’s work during the last 25 years.

Published in a hard back edition of 1,000 to coincide with The 25 Paintings exhibition at Eastside Projects, Birmingham, England. They were also presented at this exhibition as ONE THOUSAND BOOKS #5.

THE BOOK IS ABOUT:

Secret double lives, Spaghetti Junction, painting, discovering the entrance to The Under World, beginning a twelve year World Tour at the ages of 60, paintijng your head, a white Transit Van, caring too much, why Black Sabbath matter, sculpture, knocking on doors, pretending not to care, an exhibition at Eastside Projects in Birmingham in the Spring of 2014, dancing on tables, power, numbers, time passing, getting things done before you die.

AND CONTAINS THE WORDS:

Artists are flunkies. They are flunkies to Power. Where the Power resides, shifts through history. From the Pharaohs, via the Vatican, to Saatchi and the many stations between and beyond, artists can be found wallowing in their flunky ways…

Power wants what Art has. What the Artist can provide makes Power feel good about themselves, it defines who they are, and it confirms their power not only to themselves but to all the others that they are wanting to impress with their power…

‘Come the revolution Drummond, you and your 25 so called paintings will have no use let alone value. They won’t even be much use as building material for the barricades. At most we could break them up and use them as kindling to keep us true revolutionaries warm at night as we (wo)man those barricades…’

My theory went something like this: all big art was the art of bullies, dictators or dominant cultures, be it Imperial Rome, Stalin’s Russia or the free market economy in the liberal West. For me, there was little difference between the games at the Colosseum, Soviet realism, U2 plating a stadium gig, a Spielberg movie, a Jackson Pollock hanging on the walls of MOMA, or for that matter whatever is currently drawing the crowds in the Turbine Hall. It is all the big bullying art of the dominant culture telling us who knows best. And all we are expected to do is bow down, grovel, genuflect, take the lashing or just buy the merchandise. It is irrelevant what the artists’ intentions are in making the art; the only thing that counts is the role the art plays within the culture in which it exists…

Probably – if you are looking for more of Bill’s stories you might be slightly disappointed in this book as most of its contents are photographs and full-page posters only. However, with the Penkiln Burn website being closed this is a great anthology of his past work filled with high-quality imagery you won’t find anywhere else.

“The 25 Paintings” by Bill Drummond