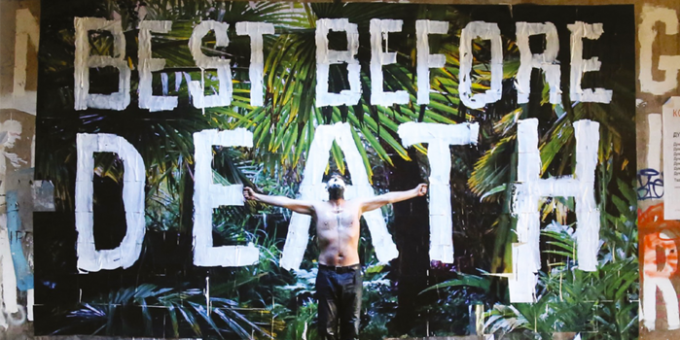 Having been shown in various venues around the UK since 2019, the home cinema release of Paul Duane’s feature-length documentation Best Before Death is now available for pre-order from the website of UK distributor Anti-Worlds.

Since 2014, he’s been on a World Tour, travelling around the world with his show – The 25 Paintings – visiting a different city each year. In December 2016, he based himself in Kolkata, while in the Spring of 2018, he was in Lexington, North Carolina.

In each place, he carries out his regular work, setting up a shoeshine stand in the street or building a bed in order to give it away.

He walks across the longest bridge he can find, banging his parade drum at dawn, starts knitting circles with anyone who wants to join him, bakes cakes and offers them to strangers whose houses sit on a circle he’s drawn on a map of the city.

He’s not rich, and he’s deliberately designed his actions so they cannot be monetised. He’s mostly been ignored by the art world. So what is he doing it all for? Director Paul Duane shadowed Bill Drummond for three years before starting this film in order to achieve some level of understanding of what he’s about. Co-produced by Grammy Award-winning writer Robert Gordon and shot by Oscar-nominated DOP Robbie Ryan, the documentary is a fascinating look at an uncompromising artist.

Best Before Death is named after Drummond’s belief that the World Tour, scheduled to end when he’s 72, is a race against his own mortality.

It’s a film about life, death, art, money, music, and cake. And some knitting.

Filmed over the course of two years, Best Before Death follows Bill on his 12-Year World Tour through the streets of Kolkata, India, and Lexington, North Carolina, where he tries to perform various tasks he has imposed upon himself in the past, including shining shoes, making beds, and baking cake.

The limited Blu-Ray edition not only includes the full-length documentary but is packed to the brim with bonus content as well.

The Blu-Ray will be released on 28 September.