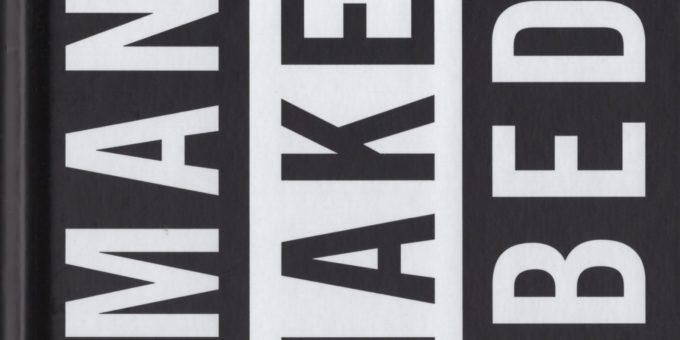 “Man Makes Bed” is the 15th book published by Penkiln Burn. Originally released as a softcover edition of 40 copies for those attending Witte de With Straat Festival, Rotterdam, Netherlands, a hardcover edition of 1,000 copies was published in 2014, including a Chinese translation by Zhang Rui and Hou Junmou.

THIS BOOK HAS BEEN WRITTEN BY:

THIS BOOK IS ABOUT:

It also about other things. [sic]

AND CONTAINS THE FOLLOWING WORDS:

All 1,000 copies were presented as the sculpture ONE THOUSAND BOOKS #3 at Eastside Projects, Birmingham, England between 15 March & 14 June 2014 as part of Bill Drummond’s exhibition The 25 Paintings. They will also be presented as this sculpture at future exhibition of The 25 Paintings throught out their world tour (2014 – 2025) until all stocks have been sold out at that point the sculpture will exist in the hands and minds of the people owning the individual copies of the book.

This book will not be available through the usual channels.Bill Drummond