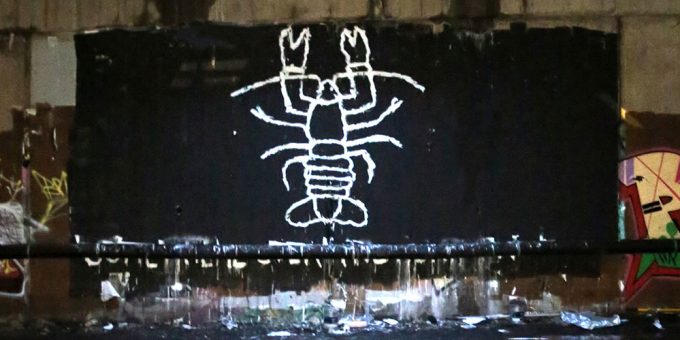 This coming Tuesday (December 13th) Under The Junction, the fourth book in a series by Bill Drummond’s alter ego Tenzing Scott Brown will be on sale in a most familiar and fitting place – and like its predecessors it comes with a rather unusual price tag.

This coming Tuesday is to be the last Tuesday of The Travelling Salesman’s Autumn 2022 tour.

Between 12noon and 2pm, The Travelling Salesman will be under Spaghetti Junction on the West towpath of the Tame Valley Canal. He will be there selling the first forty copies of Tenzing Scott Brown’s final play Under The Junction.

The price of one of these first forty copies of Under The Junction, is one book that you think I should read before I die.

On the other side of the Canal, I will be painting the head of a Roach on the wall.

As of Wednesday the 14th of December, the remaining 360 copies will be for sale via Alimentation.

Remaining copies of the previous three books in the series – The Pied Wagtail, Paint, and Semaphore Signals – have already been made available via Alimentation.