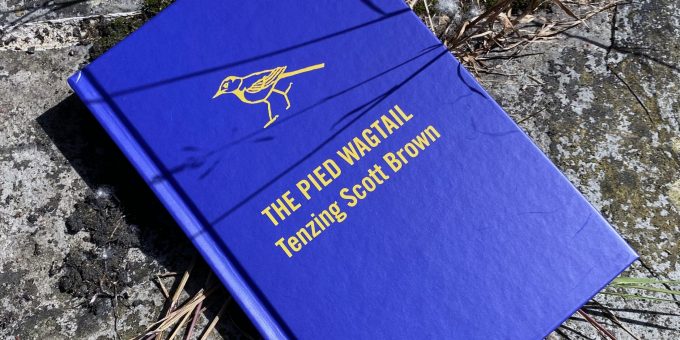 The Pied Wagtail by Tenzing Scott Brown was printed in 2022 in an edition of 400 copies and is the 27th book published by Penkiln Burn.

Initial copies were sold by Bill Drummond near Southgate Tube Station in London, with the remaining copies later made available through the Alimentation webshop.

THE PIED WAGTAIL is a play about:

The glory of Southgate Tube Station; emptiness; waking up one morning to discover you are a wooden puppet; your net worth being more than you thought; tipping the scales of creation, so life on Earth will irreversibly slide into complete and utter oblivion; you and Che Guevara; an unseen bird called Pied Wagtail that might be controlling the universe; getting to Potters Bar when no one gets to Potters Bar; the end of the line being where myth begins; The Ghost of Amy Winehouse not singing Back To Black at the Chicken Shed; Elvis Presley missing the bus to Potters Bar in time for his 68 Come Back Special; those old friends Right & Wrong still unable to resolve their differences; catching the bus just in time.

THE PIED WAGTAIL is a play almost containing the words:

“If you are visiting London for the first time, don’t bother with Shoreditch or Hoxton and all that. Instead, get the Piccadilly Line out to Southgate and sit on this eight-sided bench and view the passing world. It is not quite 80 Blocks From Tiffany’s but it is 18 stops from Knightsbridge.”