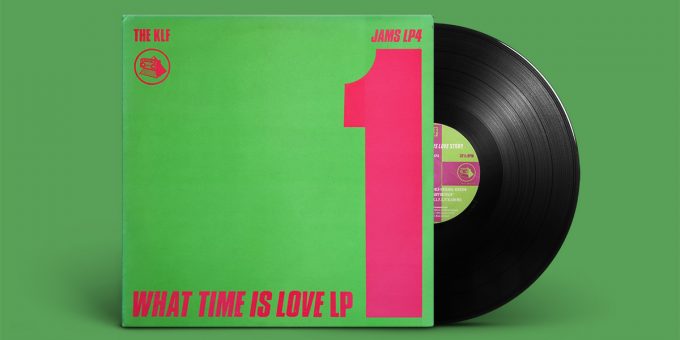 The What Time Is Love Story is a six-track mini LP released in the wake of the success of What Time Is Love? in Europe, gathering various cover versions collated by The Orb’s Alex Paterson.

The versions included on the LP had previously been released in Belgium and Italy, though not necessarily under the same name. Most of them wouldn’t even credit Bill Drummond and Jimmy Cauty as the original songwriters.

JC: It came as a complete surprise. People from an Italian company rang wanting to license the single. So we set up all these meetings which they never came to. The next thing we know the Italians have set up their own band, The KLFS and they’ve done their own acidic cover of the tune!

BD: In fact it was a big noise in Italy. Our tune went into the Italian Top 40 just on exports alone. And given what we’ve been up to in the past, the irony of ourselves being ripped of lock, stock and Waterman, was not lost on us. […] Soon as we knew, of course, we were on to our publishers shouting, ‘Sue the bastards’.NME, 26 Aug 1989

However, rather than pursuing legal action the duo decided to return the favour in the most fitting way: knowing that the “original” artists could hardly argue against it, they put some of the cover versions out in the UK on their own compilation instead, selling for half the price of a conventional album.

With masters obviously not available all versions had to be recorded from their original 12″ releases, though, hence there is some vinyl surface noise present even on the CD release.

The album closes on a live version of What Time Is Love? performed by The KLF at the “Land Of Oz” chill-out room at London nightclub Heaven.

Around the time of release some people speculated that all of the alleged cover versions were in fact the work of The KLF in disguise, and with the extensive online knowledge of websites like Discogs not available back in 1989 you can hardly blame them.

However, even though such a move would be very much in the spirit of The KLF, these rumours have long been debunked as most of the artists featured on the LP possess an independent discography beyond their cover version of What Time Is Love? both under the same name or further aliases.

The upcoming release of The What Time Is Love Story had been announced through Info Sheet #6.

The next release will be JAMS LP4 – THE WHAT TIME IS LOVE STORY (25th Sept).

This is a six-track, 40 minute mid-price LP. It’s a sample of some of the illegal (it’s in their karma) cover versions of everybody’s favourite arm-waving-in-the-lasers track, that have been popping up all over Europe this year. Also included is a recording of the K.L.F.’s premier live performance at The Land of Oz on 31st July 1989.KLF Info Sheet #6, Aug 1989

The What Time Is Love Story replaced the then still planned (and eventually scrapped) White Room Soundtrack as JAMS LP4.

The original version is thoughtfully included but other mutilations of the same are equally inspiring. The mysterious Dr Felix’s ‘Relax Your Body’ is the stand-out cut. […] Elsewhere, remix chores are performed mechanically (the obligatory Italian mix) but even at its least innovative, ‘What Time’ is still compulsive lights-out listening.

Hardly the KLF at their most controversial but at least one of these six variants on the KLF’s finest oment really should be yours. But whether you’re willing to fork out a fiver for the privilege is entirely up to you.

This LP collects the original, a live version, plus various house, Italian and Belgian-style “tributes”, of which one wonders why all the vocalists sound so alike (and British, even when praising Allah), and wouldn’t it be a good scam if you released 18 different versions scattered across Europe? On the other hand, seeing as the whole thing sells for under a fiver, you could just enter into the spirit of it all and just have fun with some rather good dance music.
Ian Cranna, Q Magazine, Dec 1989

If you do the right thing and fall asleep with this album in your headphones or trip the light fantastic, you become covered with more goosebumps than any self-respecting plucked Christmas bird and start having very pleasant dreams about vampires dipping their fangs into your expectant jugular.
Helen Mead, Unknown

11 thoughts on “The What Time Is Love Story”