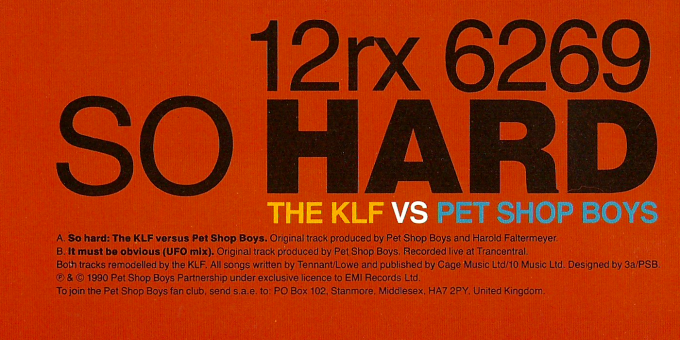 Despite being approached by various artists during their career So Hard (The KLF vs Pet Shop Boys) is one of the very few remixes Bill and Jimmy did of other people’s tracks.

We did a re-mix of So Hard. They sent us as Mitsubishi 48-track digital machine but we only had our 12-track so we told them we had 48-track recording and charged them for it! When the Mitsubishi mixer arrived we said that for various artistic reasons we’d have to start again. Jimmy got one look from the DAT of their mix and we just completely recorded the whole thing again. Neil Tennant came down and did his vocals, whatever bits and pieces we were going to use. It was a complete remake, re-model, re-mix.Bill Drummond, International Musician & Recording World, 1991
It was brilliant to meet him really. When he came he looked really normal, like a university lecturer but as soon as he opened his mouth to sing it’s like (clutches his heart) ‘Wow, it’s Neil Tennant! In our basement!’ Then all that emotion of his voice really gets to you.Bill Drummond

The story behind the single’s B-side, the ambient UFO remix of It Must Be Obvious, is just as strange, as Chris Heath recalled in Details in 1991.

Changing hats, [The KLF] agreed to remix the Pet Shop Boys single “So Hard/It Must Be Obvious” (issued as KLF vs. Pet Shop Boys), but applied predictably lateral thinking. The scenario, they explained, was this: UFOs come down to Earth and find a transistor radio with the Pet Shop Boys coming out of it, think “That’s the sum total of human culture? Sod that – we’ll blow up the world,” do so, and then leave.Chris Heath, Details, Sep 1991

The original UK release of So Hard (KLF vs PSB) was issued as 12″ single only. A CD5 version was released in Germany the same year.

An image shared by @petshopboysstudio on Instagram in November 2022 suggests that addditional versions had been commissioned but remain unreleased, including an extended version and dub mix (all reportedly similar to the commercial version).

2 thoughts on “So Hard (The KLF vs Pet Shop Boys)”