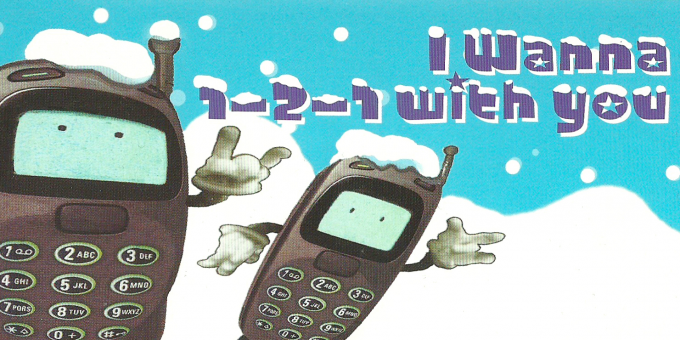 I Wanna 1-2-1 With You is a novelty synth-pop single produced by Jimmy Cauty and Guy Pratt as the Solid Gold Chartbusters. The track itself is built around the famous Nokia ringtone and features vocals by Denise Palmer, Debbie Chazen and British comedian Lloyd Stanton.

It’s awful. Hear it once and that’s it, it’s all over. There is nothing vaguely hip, it’s just pure now, throwaway novelty pop.Jimmy Cauty, NME, 10 Nov 1999

According to Heat Magazine record label Virgin had struck a record deal before the song had even finished playing. German magazines Der Stern and Der Spiegel furthermore claimed that Cauty’s deal with Virgin would have automatically been extended if 1-2-1 had entered the Top 20. The single only peaked at #62, though, sparing everybody (a reluctant Cauty first and foremost) from a follow-up.

Prior to the release of 1-2-1 Virgin issued press releases in both English and German, billing the Solid Gold Chartbusters as “The World’s First Novelty Supergroup”. 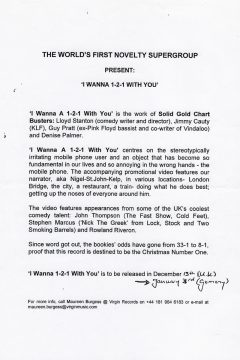 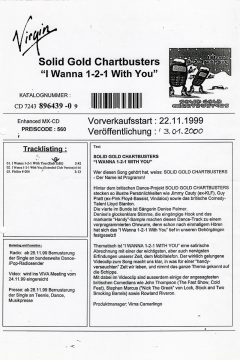 A novelty record that is so unspeakably annoying that NO FUCKER IN THE COUNTRY BUYS IT. Admittedly, the annoying yuppie talking on the phone annoyingly is reasonably funny, if annoying, but the main culprit is the actual mobile phone bleep (jingle? blingle?) which runs through the entire track.
Johnny Cigarettes, NME, 1999 (?)

The CD5 single includes the music video for the single.

Plays the same tracks on both sides.