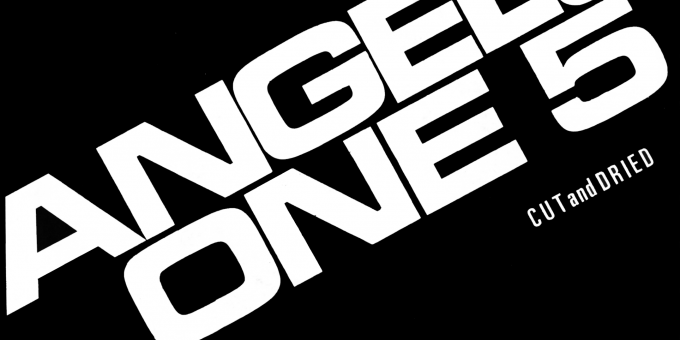 Cut And Dried is the only single by British post punk band Angels One 5 who consisted of Jimmy Cauty, Cressida Bowyer, John Cook and Martin Cottis. While the band never rose to national fame this 7″ release is notable for being the earliest physical release of any band of which Jimmy Cauty was a permanent member.

Both Cressida Bowyer and Martin Cottis had previously played in Big Hair together with Tom Langton-Lockton. The short-lived band was busy doing live gigs before landing a deal with London label Fresh Records who asked them to record a single for them. However, their post-punk cover version of Puppet On A String failed to gain enough sales when Fresh were apparently unable to keep up with demand from record shops. A couple of other record labels showed serious interest in the trio, but Big Hair eventually dissolved before a new deal could be struck.

After the demise of Big Hair both Cressida and Cottis formed Angels One 5 together with Jimmy Cauty and bassist John Cook. Following an ill-faited live performance at the Brixton riot reconciliation concert and a Peel Session in July 1981, the band’s first (and only) physical release was published by Essex label Galaxy Records in 1982 which included an alternate version of the previously performed Cut And Dried as well as new B-side Countdown.

However, despite the favourable support from John Peel who had rated their performance as one of his favourite sessions of 1981, none of the band’s other songs got a physical release as Galaxy Records went bankrupt shortly thereafter. Angels One 5 kept doing more live gigs while trying to strike a new record deal, but with the number of independent bands ever rising they found it impossible to find a new label and slowly started to fade out.

While Jimmy would later join Martin Glover as a member of Brilliant, his then-girlfriend Cressida didn’t make another musical appearance until Disco 2000.

John Cook went on playing bass on a couple of tracks by Scottish new-wave duo Strawberry Switchblade (who coincidentally were managed by Bill Drummond and David Balfe) and joined Langton-Lockton and his new band Circus Circus.