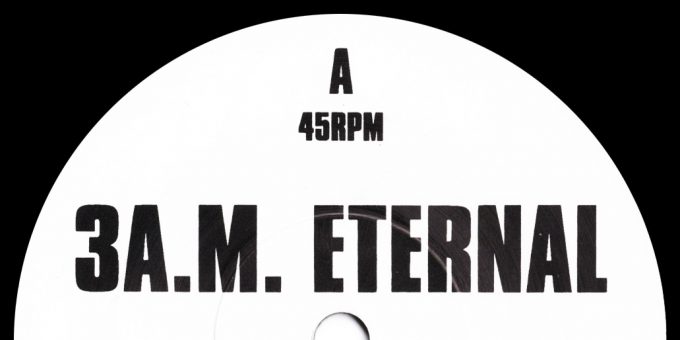 Since they were not allowed to perform their re-recorded collaboration with Extreme Noise Terror at Top Of The Pops, The KLF released 3 a.m. Eternal (Christmas Top Of The Pops) as a limited mail-order only single in January 1992. The new version combined elements of the KLF’s #1 single with trash metal guitar riffs and growled vocals.

Both bands went on to perform a similar version at the BRIT Awards ceremony in front of a baffled and (mildly) shocked audience one month later.

Due to Bill and Jimmy retiring The KLF in May 1992 this remains the only ever finished track related to the Black Room recording sessions.

This one-sided, white label, 1,000 copies only, your-mates-won’t-have-it-and-you-will seven inch monster is in the great tradition of KLF product, not as shiningly beautiful as ‘Last Train To Trancentral’ or quite as bonkers as ‘Justified And Ancient’, but any band who can discern the secret link between hardcore trash and hardcore dance are well worth the candle. This is a record that makes you laugh ’til your ears bleed.
NME, 11 Jan 1992 (Mail Order Single Of The Week)

As with most limited KLF vinyl releases this one has been heavily bootlegged in the past as well. You can find more information about these in our FAQ section.