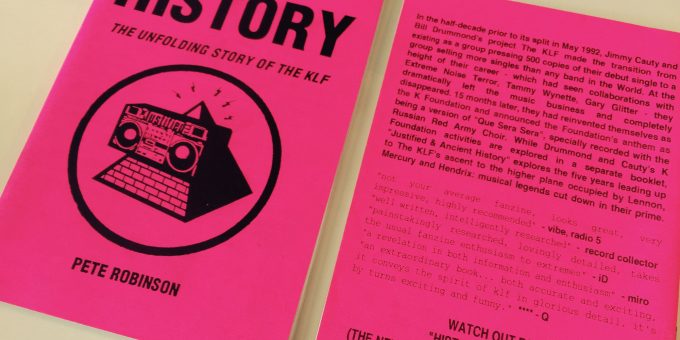 “Justified And Ancient History” is a fanzine written and self-published by then 15 year old Pete Robinson.

The small book follows the history of the KLF ‘from pressing 500 copies of their debut single to selling more singles than any other band’. The writing is no more than a brief summary of all their exploits but also contains lots of interesting material including a photo of Trancentral, an exclusive questionnaire filled in by Drummond, and the Pure Trance labels. It has sold more than a 1000 copies!

My favourite band split up, so I put their story into a fanzine.

The writing in this fanzine is of an almost comically low standard, and two decades later I have no idea if I was being ironic when, in the blurb on the back, I compared the band’s split to the deaths of John Lennon, Freddie Mercury and Jimi Hendrix: “musical legends cut down in their prime”.

(I must have been joking, surely? Jesus wept.)Pete Robinson

1 thought on “Justified And Ancient History: The Unfolding Story Of The KLF”