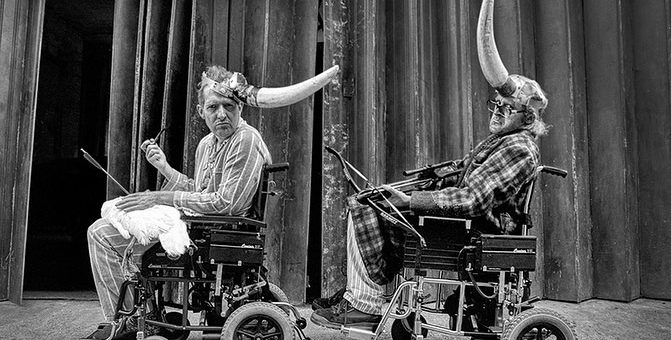 British photographer Perou recently shared a couple of photographs of Bill and Jimmy from their 2K period in 1997 from what he recalls being one of the most fun shoots he ever did, including some never-before seen pictures of the pair.

On instruction, I had to ask my agent to source two motorized wheelchairs, two pairs of gentleman’s pyjamas, a crossbow and a recently dead (floppy) swan.

Clad in their evening attire and donning their signature horns the duo then set course through the city like the elderly gentlemen they portrayed.

We shot around the streets in Shoreditch with Jimmy and Bill ramming people with their wheelchairs, never out of character.

I’m pretty sure it’s impossible to ride around Hoxton with a loaded crossbow these days, however old you are.Perou

According to Perou the couple was untroubled by armed police, though.

Check out Perou’s Facebook posts (here and here) for some higher quality pictures.