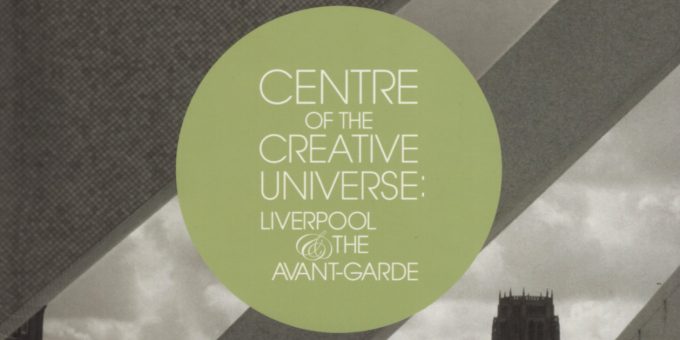 Published by Liverpool University Press in 2007, the release of Centre Of The Creative Universe coincided with the exhibition of the same name at Tate Liverpool. The book contains various photographs, event posters and newspaper clippings documenting the post-WW2 art history of the UK’s fifth-largest city.

Apart from the imagery the book features various essays, including Bill Drummond’s 10-page chapter “Liverpool Will Never Let You Down” in which Bill challenges Liverpool to ‘deliver the goods in their year as European Capital of Culture’, and a reproduction of the corresponding “I Challenge You” poster of which 100 copies were flyposted around the streets of Liverpool.

The book also includes a whole chapter on Eric’s (the club of Roger Eagle which provided a stage for various local bands including Echo & The Bunnymen, The Teardrop Explodes and Drummond’s own Big In Japan) contributed by Jaki Florek.

Liverpool is a place of myths both as generated by its inventive inhabitants and as envisaged from afar. As infamous Liverpudlian raconteur George Melly points out, the city is aware of its own myth and eager to project it.

Centre of the Creative Universe presents Liverpool as a world city with an undying capacity to inspire imaginations from Sefton Park to San Francisco. Lavishly illustrated, this book traces the representation of the city in art, photography, film, music, literature and poetry and presents an insightful and revealing account of art and bohemian life in Liverpool since 1945.