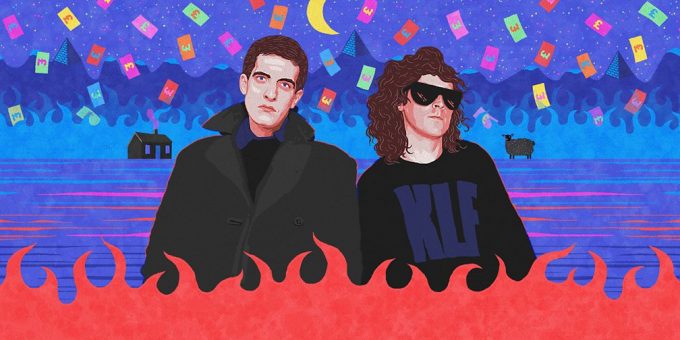 How To Burn A Million Quid was a comedy drama aired on BBC Radio 4 in 2019, loosely retelling the history of The JAMs over six half-hour episodes from the early days of Bill Drummond working as manager in the music industry to the K Foundation’s burning of a million quid.

While not entirely a work of fiction the programme takes a lot of artistic liberties for the sake of comedy, therefore listeners should not expect an accurate retelling of the real story of Bill and Jimmy.

How To Burn a Million Quid lays the story bare. A comic, surreal and fast moving adventure that sees Bill and Jimmy rise to the very top of the music industry, becoming the biggest selling music act in the UK before crashing out of the industry in spectacular fashion and heading toward the art world with the intention of creating similar mayhem. Inspired by a madcap theatrical genius and a cult novel, they blaze a trail that takes them to Sweden, the North Pole and the Sierra Nevada, via Northampton, before arriving finally on the Isle of Jura, with two suitcases containing a million quid.

It was their mission to cause chaos. And they did.BBC Radio 4 Synopsis

All individual episodes were called rules, which is likely to be a nod towards the rules from The Manual or Bill’s Ten Commandments Of Art.

Rule 1. Begin an inner alchemy to transcend the consensual reality tunnel and move from a state of fixation to a condition of mutability.

Rule 2: Don’t do anything unless it’s heroic.

Rule 3: Only a madman is absolutely sure.

Rule 5: Know when to walk away.

All six episodes are still available from the BBC Radio 4 website at the time of writing.