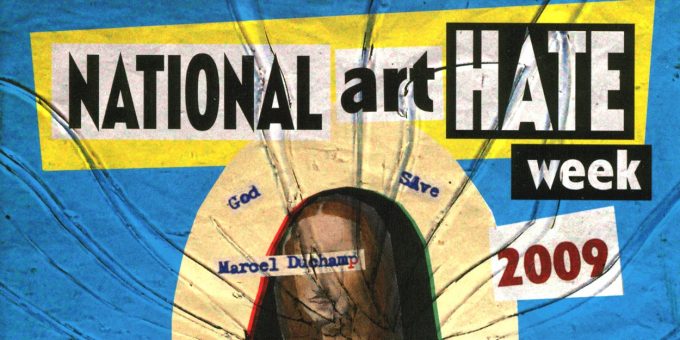 Art Hate was a song performed by Jimmy Cauty and Billy Childish and the B-side of the National Art Hate Week 7″ single. It was released as a limited edition of 113 signed copies (as well as 350 unsigned ones) and features artwork by famous British artist Jamie Reid.

The band’s punk-rock anthem has Childish angrily reciting paragraphs from the Art Hate manifesto, occasionally interrupted by the band’s rhythmic “Art-Hate-Art-Hate-…” chants during the choruses. Meanwhile a constant background soundscape of gunshots and fighter planes shines through every now and then.

Furthermore large chunks of Richard Wagner’s Ride Of The Valkyries are sampled during its intro and chorus sections, as well as Gustav Holst’s Mars, The Bringer Of War during the breakdown (Holst’s The Planets had previously been sampled on the 808Bass Version of Last Train To Trancentral).

The single was available through the Art Hate and L-13 websites, along with numerous posters, flyers and free member cards.

National Art Hate Week ran from 13th to 20th July 2009 and was an event created by the “non-organisation” The British Art Resistance (Childish/Cauty and Harry Adams).

NATIONAL ART HATE WEEK is a call for direct action against the mass acceptance of art as a phantom economy for the smug manipulative elite and their ensuing grip of control over culture as a tool for mediated emotion, market lead non-critical homogeny, and boring popularism.ArtHate.com

Throughout Art Hate Week several events were announced to be held in various locations, including a silent protest by the organisation’s members and Steven Lowe (of L-13) at the Tate Modern.

The idea behind the campaign was to encourage people to be honest about their dislike for work by renowned artists like Pablo Picasso or Andy Warhol they found boring and hateful despite the seeming consensus amongst curators and art critics alike.

Despite being listed on the artwork and the official page, the A-side track is not included on the single since “[…] for creative and legal reasons this side will be left blank”.