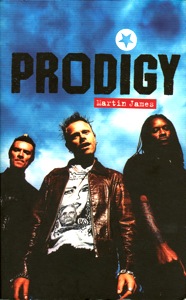 The Prodigy are the most controversial, exciting and incendiary band to have hit the music scene since Punk. Fiercely confrontational, their music has proven an irresistible force worldwide. Released to coincide with their long awaited fourth album, this book is a collaboration between the band and their personal friend, Martin James. Drawing on exclusive interviews with the band and their colleagues it recounts the band’s birth in Essex, brings back to life their earliest gigs, the initial media disinterest and their first disastrous US tour. It frankly covers their explosion on the international live circuit, their release of the fastest selling album of all time, Fat Of The Land (beating even Michael Jackson’s Thriller) and the production of their highly anticipated fourth album, Always Outnumbered, Never Outgunned.

Martin James’ biography of Britain’s other cult rave band features a short section of Liam Howlett retelling how he tried to persuade Bill Drummond to let him use What Time Is Love? as part of his Dirtchamber Sessions mix album.