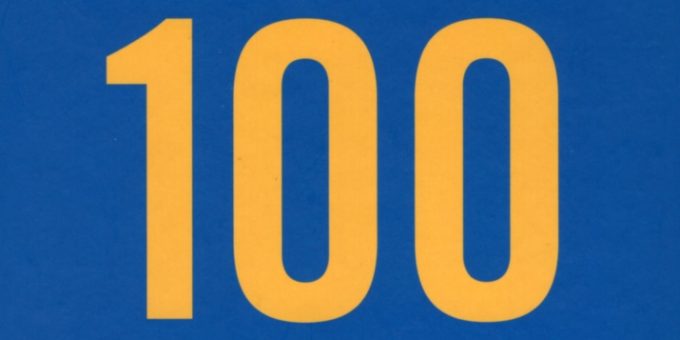 100 was published as an edition of 1,000 copies. A possible future eBook version was suggested on the Penkiln Burn website but remains unreleased as of today.

In interviews it seemed as if I was always being asked a variant of the same four questions. Thus had my polished stock answers to give.

I always had a pretty clear idea how these interviews would end up once they were published. The first half of the feature would be a précis of my career to date. In recent years this has often been lifted from the Bill Drummond page at Wikipedia, factual errors included. The second half would be about modern culture and how the things I do, relate to it. This latter half might be hung around a few quotes selected from the recording of the interview – often these quotes were taken out of context.

To me, this seemed unsatisfactory. I was either going to give up doing interviews altogether or make the interviews I gave, every bit as much part of my creative process, as the books I write, the actions I provoke or the music I instigate.

For years I tried to have some ‘control’ over the media I appeared in by being as picky as I could about the interviews I gave. The thinking being, that by attempting this, somehow I would be able to make my media presence work for me. As of the 1 January 2010, I flipped this thinking. I decided I would respond favourably to the first 25 interview requests that came my way, whatever the status of the journal, with the one, okay two, provisos – they could only ask me four questions and these four questions must never have been asked of me before.

As yet I am uncertain if this has worked, I know many of those asking the questions have felt stifled. But maybe I should get even more hard core, use the same process but not give anymore than 25 further interviews, between now and whenever I die.

The book furthermore marks the first in the series of sculptures named One Thousand Books.

But there’s more to it than that – two of the interviews on social inclusion and Haiti make for particularly interesting reading.